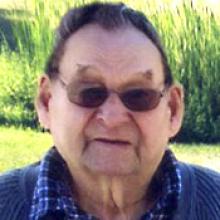 JOHN (JACK) HENRY JAMES CONNER 1925 - 2014 On Wednesday, February 19, 2014 after a brief illness, Jack Conner passed away at Boundary Trails Health Centre. Jack worked for the Department of Highways and Transportation and retired on October 31, 1990. He lived most of his life in Crystal City and the last few years at the Rock Lake Personal Care Home in Pilot Mound. Dad's family and friends will remember him whistling all the time, working in his yard and driving his riding lawn mower down town! Jack is survived by his daughter, Kathy and her children, John, Lori (Ryan), his wonderful son-in-law, Claude Plante and his children, Bobbi-Lee, Jody (Melissa), two great-grandsons, Conner and Nathan and his cherished friend, Earla McKellar. He was predeceased by his son, Everley, daughters, Germaine, Renita and Darlene (Plante). Graveside service will be held at 1:00 p.m. on Friday, February 21, 2014 at Snowflake Cemetery. Sincere thanks to the staff of the RLPCH for their care and compassion over the years. In lieu of flowers, donations may be made in Jack's memory to either the Heart and Stroke Foundation or the Cystic Fibrosis Foundation. Wiebe Funeral Chapel, Morden In care of arrangements, 204-822-4755 wiebefuneralhomes.com