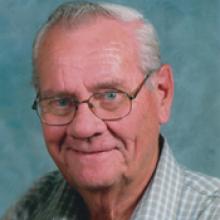 ALLAN FORSBERG 1934 - 2014 Peacefully with his wife and daughters by his side, Allan Forsberg (Frosty) passed away on Wednesday, February 19, 2014 at the Grace Hospice. Al will be sadly missed by his loving wife Bev; his daughters Kim (Keith) Grant, Debbie (Manfred) Rehm, and his grandchildren Kelsey (Darryl) and Kyle, and many friends and relatives. He was predeceased by his parents, Carl and Florence, sisters Dorothy and Shirley, brothers Roy and Larry, grandchildren Kaitlyn, Kristopher and Karalee, and his good buddy George McLean. Born in Winnipeg on March 12, 1934, Al grew up in Fort Rouge. After graduating from Kelvin High School, he served in the Royal Canadian Navy, which spawned many great stories. From there he worked for the CN Railroad, and eventually found his career with the City of Winnipeg Fire Department where he spent 36 years, retiring as a District Chief in 1993. Throughout his life Al enjoyed family camping trips to Rushing River, get togethers at the Forsberg family cottage at Hecla Island, family barbecues in the backyard and visits from the grandchildren at Nan and Pop's riverside retreat at Prawda. After retirement Bev and Al enjoyed traveling south for the winters to Arizona. Al was fondly known as "Frosty" throughout the fire department, and if you ran into a fellow fire fighter that didn't know Al Forsberg, chances are that they knew Frosty. Frosty was known for his love of card games, unrelenting sense of humour, his down to earth persona, and his good heartedness. After retirement, Al dedicated many hours of his time as a volunteer to the Salvation Army, and he enjoyed visiting with the guys at the 5 Platoon monthly retirement breakfasts. Frosty, always looking for the next good laugh, enjoyed the company and camaraderie of his buddies at the Stagger Inn. He was a wonderful husband, a loving father, a good friend, and he cherished the time spent with his grandchildren. A special thanks to Local 867 UFFW for your caring and support during Frosty's illness, and to the nurses, doctors and all of the staff at the St.Boniface Hospital Palliative Care and the Grace Hospice. As per Al's wishes, cremation has taken place and a private family memorial service will be held. In lieu of flowers donations may be made to Young Adult Cancer Canada, 18 Argyle Street, Suite 201, St. John's Newfoundland, A1A 1V3 or to the Fire Fighters Burn Fund 303 - 83 Garry Street Winnipeg, Manitoba, R3C 4J9.