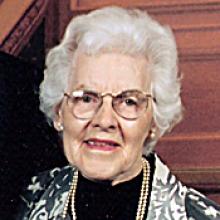 MARGARET MCFADDEN (nee DYKER) Surrounded by four generations of her loving family, Margaret McFadden, (nee Dyker), died peacefully at Valleyview Care Centre in Brandon, Manitoba, on February 18, 2014, at the age of 90 years. Marg was born March 5, 1923 in Belmont, Manitoba, the first daughter in a family of five boys. Her sister Jean was born seven years later. Their father was a United Church minister, so the family moved to the different rural charges of Waskada, Binscarth and Alexander, before Marg left home. She graduated from the Faculty of Home Economics at the University of Manitoba in 1944. She taught at Neepawa for the next three years and then worked for the Manitoba Extension Service, based in Winnipeg, but with most of her work in rural areas. This involved judging at country fairs, 4-H Achievements and Rallies, and with the advent of rural electrification, demonstrating electrical home appliances. During this time and until her marriage, she also taught at the Agricultural and Homemaking School in Brandon. It was here that she met her future husband, when Don McFadden joined the staff in the fall of 1951. Marg and Don were married in Winnipeg on June 27, 1953, the ceremony conducted by her eldest brother Reverend George Dyker. After their honeymoon, they began their married life on their farm near Rivers. In February 1955, they welcomed their firstborn, and within three and a half years, their family of four, including twins, was complete. Family was paramount to Marg, in her roles of daughter, sister, aunt, wife, mother and grandmother. She served her family selflessly, creating a nurturing home where her children thrived and in time, her grandchildren were regularly welcomed. Marg excelled at sewing and handicrafts, baking and preserving. Her chicken dinners, chocolate chip cookies and raspberry jam were family favourites. As well as being a homemaker, she played a supportive role on the farm and was active in her community. For two years in the early 1970s, she taught Home Economics at Rivers Collegiate. She was a longtime member of the Pendennis Hospital Guild and the Rivers Hospital Auxiliary, served as a 4-H leader and was committed to her church. She was a member of the Rivers United Church for over 60 years, a Life Member of the United Church Women, sang in the choir and led the church's junior choir when her children participated. Along with her faith, music was central to Marg's life. She was a trained and talented vocalist, and played the piano. She shared her love of music with her children and grandchildren, and coached many local young people preparing for their music festival performances. Outside her professional teaching roles, Marg remained an educator. As well as tutoring music students, she taught sewing and other skills as a 4-H leader, taught her children to waltz around the kitchen floor, and took a lifelong interest in correcting family members' grammar. Moreover, she led by example, through her kindness, compassion, humility and integrity. Her deep faith and inner strength sustained her and inspired those around her. Marg is survived by Donald, her husband of 60 years; her sister Jean; sons Gordon (Michelle), Jamie (Lesley) and Bruce, and daughter Barbara McCannell (Brent); grandchildren Kendra McFadden (Dr. Jason Bayne), Dr. Nicole King (Matthew) and Marcia McFadden; William (Suzannah), Alastair and Michael McFadden; Rainer Nguyen-Friesen; Ross McCannell and Dr. Melanie McCannell; great-grandson Oliver Bayne; and many nieces, nephews, great-nieces and great-nephews. Marg was predeceased by her parents, Rev. Dr. George A. and Lulu Dyker; her brothers and sisters-in-law: Rev. Dr. George F. and Helen Dyker, Allan Dyker, Lyle and Beatrice Dyker, Dr. Gordon and Peggy Dyker, Hedley and Helen Dyker; her parents-in-law Chester and Madge McFadden and sister-in-law Eileen McFadden. Funeral service was held at 11:00 a.m. Saturday, February 22, 2014 at Rivers United Church, Reverend Glenna Beauchamp officiating. Active pallbearers were her grandchildren: Kendra and Marcia McFadden; William, Alastair and Michael McFadden; Ross and Melanie McCannell. Granddaughter Nicole King, who was unable to attend, was honourary pallbearer. Fittingly, following the service, the Rivers United Church Women served a light lunch and refreshments to family and friends at the Rivers Legion Hall. Interment was at Rivers Cemetery. In lieu of flowers, memorial donations may be made to the Rivers United Church, P.O. Box 444, Rivers, Manitoba R0K 1X0, Rolling River Festival of the Arts, P.O. Box 333, Minnedosa, Manitoba R0J 1E0, or the Riverdale Community Centre, http://www.riversrink.ca/fundraising/. Expressions of sympathy may be made at www.memorieschapel.com. Arrangements with Memories Chapel & Pre-Planning Centre, Brandon, 1-888-694-8153.