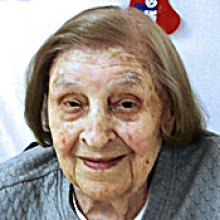 ANNA WEREHA (WICHANKA) January 11, 1916 - March 3, 2014 Peacefully on March 3, 2014 mom passed away at her residence at the Whispering Pine Lodge in Vita, Manitoba at the age of 98 years. She leaves to mourn her daughters Helen, Emily, Pearl (Bert), Sally (Rick), son Joe (Margaret), 11 grandchildren, 14 great-grandchildren, nine great-great-grandchildren, and sister-in-law Phyllis. She is predeceased by her husband Jacob (Jack) in 1975, daughter Mary in infancy, son Leonard in 1968, son-in-law Pete in 2010, parents Olena and Michael in 1954, sisters and brother-in-law Mary (Steve), Lena (Joe), Tina (Henry), and brothers and sisters-in-law Larry (Dora), Bill (Stella) and Joe. Thank you to the home care workers that looked after mom allowing her to remain in her apartment till the age of 96. Also thank you to the staff at the Personal Care Home for taking care of mom this last year. Funeral service will be held at Vita Funeral Home, 256 Railway Ave., Vita, MB on Saturday, March 8, 2014 at 10:30 a.m. Interment will take place beside her husband in the St. Peter and Paul Ukrainian Catholic Cemetery at Pansy, Manitoba. Vita Funeral Home in care of arrangements, (204) 425-3114.