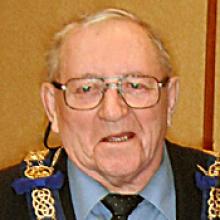 ROBERT J. DEACON It is with great sadness that the family of Robert J. Deacon informs you that Bob passed away peacefully on February 14, 2014 at the age of 85. He was a beloved father and grandfather. Bob was born in Austin, MB on March 27, 1928 to Jack and Mary Deacon. In 1939, Bob and his two sisters Marg and Mary moved to Minnedosa where he met the love of his life Betty Peggy MacKay. While courting Betty for 12 years, Bob joined the C.P.R. at the age of 15 and learned Morse Code. He became a telegraphic operator and worked in Shoal Lake, Crandall, Oak River, Rapid City, Strathclair, Griswold, Alexander, Foxwarren, Bredenbury and Carnduff before acquiring his permanent position in Ignace, Ontario. In 1949, Bob became a train dispatcher and worked at this, in Brandon and Winnipeg, until his retirement in 1986 with 38 years of service. On September 6, 1951, Bob married his sweetheart Betty in Minnedosa and they had 56 years of happy, wonderful years together. Three children were born to Bob and Betty: Barry, Brian and Bev. Bob was very active in many, various volunteer organizations: 1981 to 1982: Past Master Dormer Lodge #151; 1985 to 1986: Past District Grand Master 10th Masonic District; 1992: Past President Brandon District Shrine Club; 1993 to 1996: Representative for C.P.R. Pensioners at the Montreal Trust Committee; 2014: Annual Past Member Queen Mary Chapter #3 as well as current member of Fenwick Lodge. Bob was active in hockey, baseball, skiing, swimming, coached little league baseball, fishing and golf. Betty, Bob and family travelled frequently to their cabin in Clear Lake and spent winters in Victoria, BC with friends and family. Bob was predeceased by his wife Betty on December 7, 2007. He is survived by his children Barry (Pam) Deacon; Brian (Sheila), Sarah, A.J., Jillian Deacon; Beverley Deacon; sister Margaret (Paxton), Jean, Jim, Tom, Murray; sister Mary (Vuignier), Joan, Diane. The last six years of Bob's life were spent as a resident of Hillcrest Place in Brandon where he received wonderful care. The memorial service to celebrate Bob's life was held at Memories Chapel on February 21, 2014; Reverend Harvey Hurren officiated. A private graveside service took place. Friends who wish may make a donation in memory of Bob to a charity of choice. Expressions of sympathy may be made at www.memorieschapel.com Arrangements with Memories Chapel & Pre-Planning Centre, Brandon, 1-888-694-8153