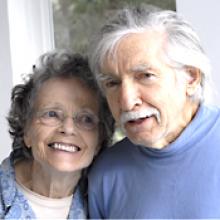 ERNEST HENRY UNDERHILL ESME ELLENA UNDERHILL (née COMBERBACH) Our loving parents Ernest Henry Underhill, 91, passed December 13, 2013 and Esme Ellena Underhill, 87, (née Comberbach) passed February 13, 2014. Both born in Winnipeg, they lived much of their lives in Nelson and Duncan, BC. They were married for 67 years. Ernest was an artist, painter, art educator and designer. He served in the RCAF during the Second World War. He left behind a legacy of paintings and art objects. He earned BFA, MFA and PhD degrees. He was a family man and an outdoors enthusiast. Esme went to l'Ecole des Beaux-arts de Montréal. She loved creating watercolours, pastels, drawings and poetry. With six children, her life as a mother and homemaker took priority over her artistic pursuits. She had a great memory, sharp wit, and good sense of humour. They raised their children to be independent, creative and critical thinkers. They are survived by their children, Elena, Eldon, Eve, Erik, Elyn and Elisa, their partners, Ernest's only sibling Edith and many grandchildren and great grandchildren. Esme was predeceased by her seven older siblings.