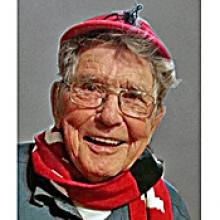 FRANK J. GOTTFRIED Frank J. Gottfried of Rivers, MB, passed away peacefully at the Rivers Health Centre on Thursday, February 27, 2014 at the age of 91 years. Frank is survived by his wife Ruby, daughters Jane (Trevor) Kusmack, Nicole (Gil) Roth, sons Randy, Darrell (DiDi), Jody (Kelly) and Dale (Cheryl). Also surviving are twelve grandchildren, eight great grandchildren, brother Leo and sisters Agnes, Flo, Kathy, Terry, Liz and Mary. He was predeceased by his parents Leon and Katherine, brothers Joe, Walter, Willie, John and Adam, sisters Victoria, Helen, Anne and Rosie. Frank was born on February 9, 1923 in Gimli, Manitoba to Leon and Katherine Gottfried. He married Ruby Curle in 1952. He served in the Royal Canadian Artillery. Frank was an avid lawn bowler, and he also enjoyed playing cribbage, darts and curling, and was a member of the 50 plus club. He enjoyed spending time with his family in Bradwardine. As per Frank's wishes, a private family service will take place at a later date. Donations in memory of Frank may be made to the Canadian Cancer Society, 415-1st Street, Brandon, MB, R7A 2W8 or to the Rivers Health Centre "Palliative Care", Box 428, Rivers, MB, R0K 1X0. Messages of condolence may be placed at www.brockiedonovan.com. Arrangements are in care of Brockie Donovan Funeral & Cremation Services, Brandon, (204) 727-0694