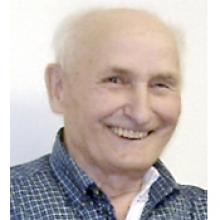 MYTRO KOTZ It is with great sadness that we announce the passing of our father, Mytro Kotz, on Sunday, March 16, 2014, at the age of 88 years. Mytro was born on September 27, 1925, in Sclater, MB. He was predeceased by his parents Mike and Lucy (Julia) Kotz, and six siblings, Harry, Nick, Alex, Joe, Stella and Olga. He was also predeceased by his son Ron, and special partner Ella. Mytro is survived by his children Dave (Joyce), daughter-in-law Shirley (Jack), Mike (April), Marg (Bill), Marilyn (Dennis), Jim (Nancy), Barbara, and Hazel (Randy), 15 grandchildren, 18 great-grandchildren, brother Dan, and sister-in-law Anne. Mytro was raised on the family farm in Sclater, MB. He later moved to the Dryden area where Mytro and Kay raised their eight children. Mytro worked for the CN Rail and the Dryden Paper Mill, but his most important and fulfilling activities came after retirement - which included caring for Ella during her illness. Family was always a priority for Mytro. He loved spending time with his family, which often involved travelling across the prairies to visit. He shared his love of card-playing with his family, and everyone has a deck of Skip-Bo cards to prove it. Mytro loved outdoor activities like hunting and fishing. He spent much of his retirement years at the Dryden Go-Getters Senior Centre, including bowling, playing card games such as Euchre and cribbage, and volunteering as whist convenor and bingo worker. He was acknowledged as a "Snow Knight" for his volunteer efforts that helped out others. Mytro took great pleasure in gardening with Ella, polka-dancing and the outdoors. He will always be remembered for his great smile, sense of humour and storytelling. The family would like to thank the staff at Concordia Hospital for the excellent care and compassion extended to Dad during his stay. In lieu of flowers, donations can be made to CancerCare or the gift of life - a blood donation to Canadian Blood Services. Dad was very proud of the number of blood donations he made over the years. In keeping with Dad's wishes, a service will be held at the Riverside Evergreen Chapel, Dauphin, Manitoba on Friday, March 21 at 12:00 p.m. Interment to follow at Sclater Cemetery. Sneath-Strilchuk Funeral Services Dauphin, Manitoba (204) 638-4110 www.sneathstrilchuk.com