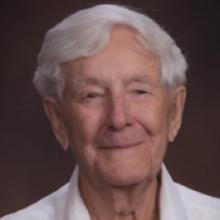 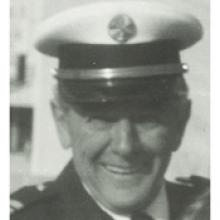 LESLIE CASEBOURNE WADE June 2, 1914 - March 21, 2014 After a long and active life, Les joined the loves of his life, his wife Muriel (Parkinson), his good friend and travelling companion, Margaret Edwards, and his first wife Mary (Lester). Family times, camping and fishing in the Whiteshell, especially at West Hawk Lake, will be remembered by his daughter, Agnes (Jack) in Spring Hill, FL, his granddaughter Michele in Erie, PA, and by grandchildren and great-grandchildren in Winnipeg: Bruce (Lisa), Kelsey and Kelsey's mom, Heather; Leslie (John), and Jim, Crystal and James. Les is also survived by his favourite sister-in-law, Margaret Ratcliffe (Lester) with whom he has had a long friendship. He is predeceased by his son Art, his brothers, Ernie, Percy, and sister Agnes. Muriel's family, Susan, Lloyd, Kelly, Mark, Kian, Ryan and Mayu, celebrate his long life and the memories made around the dining table and at the cottage where water skiing was his sport of choice, well into his 80s. Papa always made the toast at the beginning of the meal, had an appropriate story to tell, and later on, shared snippets of days gone by. Brenda, Greg and their family, Damon, Paula Noelle, Brooke, Tyler and Ali, in British Columbia will miss the stories and wisdom of his years. We are disappointed he will not get to hold his two new great-granddaughters who will be arriving in the next while, as he was very excited about their arrivals. Les was the oldest living member of the Winnipeg Fire Department at the time of his death. Linda Sherrin and the staff at Riverwood Square celebrated this achievement in December 2012 with the residents, members of his family and Les' long time colleagues. Les joined the Winnipeg Fire Department in November 1941 and retired in March 1979, serving as an Assistant Deputy Chief. Les collected friends wherever he went. Roy, Tom, Spence, Doug, Peggy and Merrill were good friends who shared happy times and took good care of each other. He loved to play cards, especially poker and bridge, and remembered the cards played and the ones that should have been played by his partner. He was a long-time member of the Fort Rouge Seniors Duplicate Bridge Group and was a regular attendee until just recently. Les travelled and cruised extensively, enjoyed golfing and curling in his earlier retirement years and continued to enjoy fine dining with family and friends, especially at Step'N Out with friends, Verna and Alan. Les loved life and life was good to him. He found great joy in giving and receiving hugs. As you think of him, give someone you know a hug. Les often said that moving to Riverwood Square six years ago was the right thing to do. As Ryan said, "Riverwood was good for Papa, and Papa was good for Riverwood!" Our sincere thanks to all the staff and residents for making it the right thing to have done. In keeping with Les' wishes, cremation has taken place. Should you so desire, a contribution to Jocelyn House Hospice, 177 Egerton Rd., Winnipeg, MB R2M 2W7 or the Firefighter's Burn Fund, 303-83 Garry St., Winnipeg, MB R3C 4J9 would be greatly appreciated. Friends and relatives are invited to a celebration of his life at Riverwood Square, 1778 Pembina Highway on Sunday, April 6 from 1:30 p.m. to 4:00 p.m.
Publish Date: Mar 29, 2014