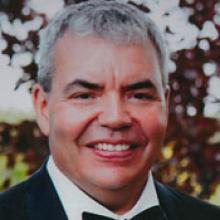 MIKE CHRUPALO Mike Chrupalo of Bakers Narrows, MB passed away Friday, January 17, 2014 in The Pas, MB at the age of 55 years. A Service of Remembrance for Mike Chrupalo will be held Saturday, April 12, 2014 at 1:00 p.m. from St. Ann's Roman Catholic Church, 163 Centre Street Flin Flon, MB with Fr. Paul Bringleson as Celebrant. If friends so desire, memorial tributes may be made to the Special Olympics Manitoba / Norman Region, 304-145 Pacific Avenue, Winnipeg, MB R3B 2Z6, or to the Flin Flon Creighton SPCA, P.O. Box 863, Flin Flon, MB R8A 1N6 or Alzheimer's Society of Manitoba, 10 120 Donald Street, Winnipeg, MB R3C 4G2. On-line condolences or to light a Life Candle may be made at www.dadsonfuneralhome.com Northern Manitoba's only crematorium, Dadson Funeral Home & Crematorium of Flin Flon, Manitoba is entrusted with the arrangements. 1-877-460-2444.