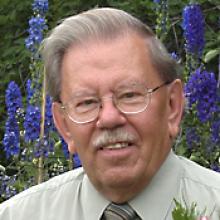 ELMER BARTEL 1934 - 2014 Elmer Bartel passed into the presence of the Lord on Sunday, April 6, 2014 at Meadowood Manor in Winnipeg, MB at the age of 79 years. Elmer will be lovingly remembered by his children, Debra (John) Loewen of Morden, MB, Cheryl (Bob) Davies of Thompson, MB and Sheldon (Cheryl) Bartel of Winnipeg, MB, his grandchildren, Suzanne, Alyssa, Katherine and Morgan and brother, Jake Bartel of Steinbach, MB. Elmer was predeceased by his wife, Anne, four sisters and one brother. Elmer was born in Kleefeld, Manitoba, attended school at Gruenfeld and graduated from Steinbach Christian High. His career was in education, from his first job in a one room school house to positions in Flin Flon and Neepawa, culminating in his role as Superintendent of Schools in Garden Valley School Division. Dad was a man of faith; actively involved in church work. He served on the local church board, was Moderator of Manitoba Baptist Churches and held a variety of positions within the church. The work of the Gideons held a special place in his heart from being part of the first Gideon camp in Northern Manitoba to the years he served on both the national and international cabinets. After retirement, Dad continued to be meaningfully involved in service at the Black Forest Academy in Germany, Providence College in Otterburne and Whyte Ridge Baptist Church. Family was a priority for dad and much time was spent together throwing the football around, working together in the garden which he loved, playing games, and travelling and camping. Even after the stroke which stole so much from him, he prayed regularly for family and friends. He faced what he knew to be his last days here, with courage and a sense of deep peace. Memorial service for Elmer Bartel will be held on Thursday, April 10, 2014 at 11:30 a.m. at Whyte Ridge Baptist Church 201 Scurfield Blvd. in Winnipeg with interment prior at Hillside Cemetery in Morden. The family wishes to thank the staff at Meadowood Manor, as well as the people at Whyte Ridge Baptist Church for all of their kindness and consideration in these last few years. If friends so desire, donations may be made in Elmer's memory to the Gideon Memorial Bible Plan, available at the church. Wiebe Funeral Chapel, Morden In care of arrangements, 204-822-4755 wiebefuneralhomes.com