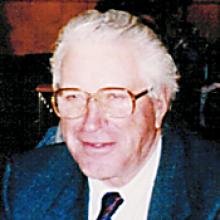 SAMUEL MCDONALD (MAC) CREITH On Monday, April 7, 2014, Mac passed away at the Rock Lake Hospital in Crystal City, MB at the age of 88. Dad was born November 11, 1925 in Edmonton, when his parents Alex and Augusta farmed at Stoney Plain, AB. In 1929 he, his parents and his two sisters moved back to farm at Purves, MB. Here Dad's brother Robert was born. On October 23, 1954, Mac married Joyce Sims from the McKenzie District. For 37 years they lived on the Creith family farm north of Purves. In May 1993 they moved to one of the Life Lease Condos in Pilot Mound. In 2002 Mom passed away. Dad continued to live there until July of 2013, when he moved to the Prairie View Lodge until his passing. He is survived by his daughter Leianne (Chris) and sons Don (Patti), Bruce, Mike (Nadine); grandchildren: Ryan (Michelle) Lea, Jonathan Lea, Justine and Dane Creith, Joannah, Jesse and Amanda Creith; one great- grandson Macgregor Lea; his sister Mary Fallis, sister-in-law Lois Creith and brother-in-law Eldred "Tim" Sims. Dad's cattle and horses were his passion and pride. He especially liked the springtime when all the little calves were being born. After moving to Pilot Mound, he still liked to drive out to the farm each day and help out until his health declined. In accordance with Dad's wishes cremation has taken place and a private graveside service will take place at the Valley Memorial Cemetery in La Riviere, MB at a later date. The family would like to express our appreciation to the First Responders and doctors and staff at the Rock Lake Hospital the day Dad had his fall, also to the Prairie View Lodge staff for the excellent care he received since moving there in July. Donations in memory of Mac may be made to the La Riviere Cemetery Association; Box 53, La Riviere, MB R0G 1A0. Wheatland Funeral Service (204) 825-2848 www.wheatlandfs.com