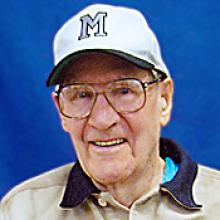 ROLAND CHARLES CROWE Peacefully, on April 20, 2014 at Grace Hospital, Roland passed away at the age of 97 years. Dad was born in Hartney, Manitoba in 1916. He was raised there until he finished high school during the depths of the depression. He travelled around the country looking for employment and found a job in Vancouver. He returned to Hartney and worked for his father who had just purchased a hardware store. In 1941 he married Lillian (Bud) Woodhull and joined the Royal Canadian Air Force. He taught navigation with the Commonwealth Air Training Plan in Brandon, MB and in Summerside, PEI. From there he went to the Bahamas for training for deployment into the Pacific. The Atomic Bomb ended the war before he was shipped. He returned to Hartney to work in the hardware store and eventually took it over upon the death of his parents. During that time he had an experience in local politics. He was a town councillor, and mayor of Hartney. He ran the store until his retirement in 1975. He and Lillian spent many happy winters in Apache Junction, Arizona. In Arizona they square danced, enjoyed family visits and just lived the good life. In the early 1980s they moved to Winnipeg but continued to spend their winters in Arizona until the early 1990s when they moved into the Westhaven Senior's complex. Dad was predeceased by his wife of 58 years in 1999. He leaves to mourn his passing sons Brian, Phillip (Val) and David (Joan); grandchildren Jon and Geoff; great-grandchildren Cecily and Lind as well as special niece Suzanne; her husband Craig and their daughter Jennifer. In lieu of flowers, donations may be made to the Commonwealth Air Training Museum in Brandon, Manitoba. Memorial service 1:00 p.m., Saturday, May 3, 2014 at Sturgeon Creek United Church, 207 Thompson Drive. A private family interment will take place at a later date. Bardal Funeral Home and Crematorium 843 Sherbrook Street, 204-774-7474 Condolences: www.bardal.ca
Publish Date: Apr 30, 2014