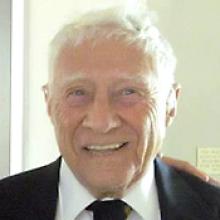 CHARLES BUCKNER PhD. Charles Henry (Chuck) Buckner died suddenly at the age of 85 in his room at the Ravines Retirement Residence in Ottawa. He had suffered from Alzheimer's for a number of years and died of natural causes. He had suffered from Alzheimer's for a number of years and died of natural causes. Chuck was born in Toronto on October 8, 1928, received his primary education at Franklin Public School, his secondary education at Jarvis Collegiate Institute, and graduated in 1952 from the University of Toronto with a degree in Honours Biology. He received his M.Sc. in Zoology from the University of Manitoba and was awarded a Ph.D. degree in Biology in 1959 from the University of Western Ontario. He spent his professional career in Winnipeg and Ottawa, much of it with the Canadian Forestry Service. His influential work on pest control through natural predators was singled out for praise by Rachel Carson in her landmark 1962 volume Silent Spring. Chuck married M. Christine (Chris) Matthews on April 4, 1953 in Toronto and they had two children: Wendy Louise Buckner, born in 1959, and Brent Charles Buckner, born in 1963. Chuck was an accomplished swimmer in his youth, and after the family relocated from Winnipeg to Ottawa, Chuck took on the duties of equipment manager for the Ottawa "Y" Olympians Swim Club, also serving as volunteer parent on-deck coach. He later spearheaded a new organization called the Eastern Ontario Swimming Association; he and his wife were leaders of the local swimming community for many years, and their daughter Wendy was a gifted coach and swimmer who competed for Technosport Ottawa before her death in 2010. Chuck himself accomplished many feats of endurance sport, including walking the Ottawa half-marathon in 4:21:54 at the age of 83. Longtime residents of Nepean, Chuck and Chris spent many winters at their condo in Indian Shores, FL. Chuck is survived by his wife Christine and his son Brent. A memorial service will be held on Wednesday, May 14 at Pinecrest Visitation Centre, 2500 Baseline Road, Ottawa at 2:30 p.m. In lieu of flowers, donations to the Alzheimer Society of Canada would be appreciated by the family. Cole Funeral Services 613-831-7122