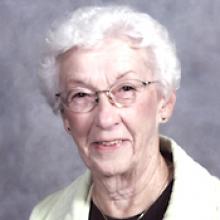 GWENDOLYN ALDA (GWEN) YOUNG Gwendolyn Alda (Gwen) passed away peacefully after a full and productive life, May 8, 2014 at Hillcrest Place Personal Care Home, Brandon, MB. She was 90 years of age. Gwen was born on the family farm north of Newdale, MB and after finishing high school, attended business college in Winnipeg. She worked for a number of years at a medical supplies company and then for Investors Syndicate in both Winnipeg and Calgary. In the 50s, she returned to this province and joined Manitoba Hydro which became not only a work place but a second family for her. After retirement she maintained her ties with friends and co-workers through the Hydro X club until she passed away. Gwen had a home in Selkirk and continued to live there for a few years after completing her career with Hydro. She enjoyed curling, golfing, canoeing and was an active member of the Elks and Order of the Royal Purple. Gwen was an avid traveller and enjoyed many trips with friends and family. Summer weekends were spent at her cottage in Sandy Lake, MB, winters in Texas where she continued to use her business and people skills on a volunteer basis. Eventually, she moved to Monterey Estates, in Brandon, MB to be closer to family (but not too close!). Once in Brandon she pursued her passions for fine china, bridge and crafts. Later she moved to Riverheights Terrace and finally, facing many health issues, to Hillcrest Place. Gwen was predeceased by her parents, Joe and Gertie Young. She leaves many behind who will remember her fondly but especially, her sister, Dorothy Lawrence of Minnedosa, niece Judy Geekie (Jim) of Strathclair, nephew Doug Lawrence (friend Diane) of Newdale, great- nieces Erin and Heather, great-nephew John and many cousins. A service to celebrate Gwen's life was held at Central United Church, Brandon, MB May 14, 2014. Officiated by Rev. Heather Lea. Interment to take place at a later date. If friends so desire, donations in Gwen's memory may be made to a charity of your choice. Messages of condolence may be placed at www.brockiedonovan.com. Arrangements were in care of Brockie Donovan Funeral & Cremation Services, Brandon, (204) 727-0694.