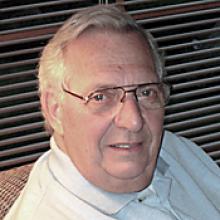 ROY (WAYNE) PARK July 16, 1938 - May 21, 2014 Roy "Wayne" Park passed away peacefully after a lengthy illness at St. Boniface General Hospital on May 21, 2014. Left to cherish his memory is his wife of 56 years, Beverley, and his children Rod (Shelley), Brett (Kelly), and Scott (Nancy) and his grandchildren Jennifer, Rod Jr., Bradley, Jeffery, Melanie, Christopher, and William, and four great-grandchildren. He also leaves behind his brother, H. Randy Park, brothers-in law; Bill Baker (Alice) and Tom Baker (Judy), and sister-in law Patti Baker. He was predeceased by his sister, Marlene Clancy. Wayne was a kind and caring man, a friend to many. He will be missed by extended family members, colleagues, and friends made over the years, including many made through Bev and Wayne's winter travels to Mexico. Wayne retired as an instructor in Mechanical Engineering Technology at Red River College. He loved teaching and inspired many in his career. Prior to RRC he worked at Bell Foundry and at his father's business, Park Hannesson Ltd. Thanks to the staff of E5 at St. Boniface Hospital for the care, compassion, and attention they gave to dad while he was there. A celebration of dad's life will be held on Monday, May 26, 2014 at 11:00 a.m. at Neil Bardal Funeral Centre, 3030 Notre Dame Avenue (across from Brookside Cemetery). A gathering of family and friends will follow in the reception centre, followed by a private family interment. If friends so desire, donations in Wayne's memory may be made to CancerCare Manitoba, 675 McDermot Ave., Winnipeg, MB, R3E 0V9. NEIL BARDAL FUNERAL CENTRE 204-949-2200 neilbardalinc.com