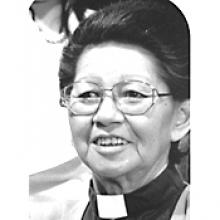 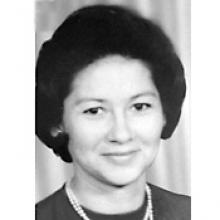 PHYLLIS KEEPER THE REVEREND CANON DOCTOR On Thursday, May 22, 2014, our beloved wife, mother, grandmother and great-grandmother passed away. Remaining to mourn for her, and to cherish her memory is her husband Joseph, daughters; Christina and Joy, sons; Lorne (Florence) and Barry (Susan), grandchildren; Jerry (Aimee), Norton, Joey (Lonna), Timmy, Craig, Jonny, Elie, Isaac, Jesse, Ozzie, Dylan, Russell, Christina, Meghan, Marina, great-grandchildren; Amethyst, Skye, Ava, Brendan, Grayson, Torin, brothers; Gordon and Cyril, sisters; Ida and Dora (Charlie) along with many, many relatives, dear friends and colleagues. Phyllis was predeceased by her parents; The Reverend Eliezer Beardy and Madeline (nee Cromarty), her brothers; The Reverend Absalom Beardy, The Reverend Thomas Beardy, Morris Beardy, Thomas Green, and her sister Lavena Martha Kakepetum. Phyllis was born on August 30, 1934 in Big Trout Lake, Ontario. She grew up in Northern Ontario, living with her parents until she went to residential school at the age of seven; Pelican School, Sioux Lookout and Shingwauk School, Sault Ste. Marie during 1941 to 1949. She then took practical nurse training in Sudbury until moving to Winnipeg in the early 1950s. It was there she met her husband Joseph and they were married in Winnipeg on September 1, 1959. In the early 1970s, she became involved in community and social development work with families, working out of Norquay School in the Point Douglas area with the Winnipeg School Division, and later with Stella Mission of the United Church. Phyllis was a member of the Anglican Church of Canada, and her basic values, beliefs and love for people is rooted in her Christian faith. She had devoted her life and energies to the care of her family and others who came into the areas of her concern. She always believed in the basic goodness of all people, and has used this belief as one of the guiding principles of her life. Phyllis went on to become a chaplain to work in hospitals, and an ordained priest in the Anglican Church. She was involved with others in the development of St. Helen's Church in the north end of Winnipeg where she worked until her retirement in the mid 1990s due to ill health. She continued to volunteer in many different activities, true to her lifelong community commitment; over the years she had been involved in the development of the Agape Table, Winnipeg Harvest, and for 10 years, she and elder sisters' made bannock to feed the gathering at the Forks after the annual Mother's Day Sisters in Spirit Walk. She always worked with various outreach programs of the Church including hospital visits, the Sharing Circle, and one activity very close to her heart was St. Matthews Sewing Circle - it was a weekly opportunity to visit, share food, to work and enjoy. In the forefront of her caring was her family, particularly her children and grandchildren. Her life can best be described in 1 Corinthians 13:13 "And now abideth faith, hope, love, these three; but the greatest of these is love." We are deeply thankful to Dr. Alojz Pacin, and to the nursing and health care aid staff at the Victoria Hospital for their kindness and care of our beloved Phyllis Keeper. Viewing and prayers will be held from 7:00 -10:00 p.m., Tuesday, May 27, 2014 at Neil Bardal Funeral Centre, 3030 Notre Dame Ave. across from Brookside Cemetery. Funeral Services will be held at 11:00 a,m,, Wednesday, May 28, 2014 at the St. John's Cathedral, 135 Anderson Ave., with burial at Brookside Cemetery. NEIL BARDAL FUNERAL CENTRE 204-949-2200 neilbardalinc.com