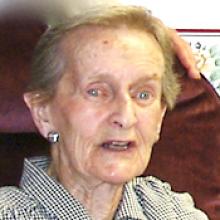 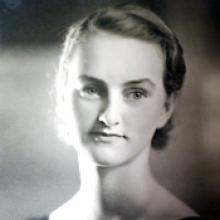 ELIZABETH ISABEL TISDALE (nee NEAL) 1916 - 2014 Betty died peacefully on May 25, 2014 surrounded by the love and care of her family and the staff of West Park Manor. Betty was born in Montreal and educated in Winnipeg at the University of Manitoba, graduating in Home Economics, and the Winnipeg General Hospital School of Nursing, class of 1940. She served in the RCAMC as a Nursing Sister overseas during the Second World War and returned to Montreal where she married Paul Tisdale who had recently returned from serving with the RCAMC in Sicily and Italy. Betty and Paul raised their family in Winnipeg where she continued to reach out to support others in many capacities including CNIB, Meals on Wheels and the Ostomy Society. She recently received the Queens Diamond Jubilee Medal in recognition of her service overseas. Betty possessed a particular gift of truly connecting and engaging with people throughout her life. Daughter, sister, wife, mother, aunt, grandmother, great-grandmother and special friend, her grace and generosity enriched the lives of so many and her memory will be treasured for this. Betty was predeceased by her husband (Paul Tisdale), parents (William and Frances Neal), and brothers (Jack and Scott). Memory of her will endure in the hearts of her family and many friends; sons John (Nancy) and Rob (Barb); daughters Frances (Ted) and Mary Ann, grandchildren, great-grandchildren as well as her many nieces and nephews in the Neal and McFarland families. The family wishes to extend a heartfelt thank you to all the wonderful staff and friends at West Park Manor who provided such excellent and sensitive care to our mother. The family is hosting a reception to honour Betty at Fort Whyte Alive on Monday, June 9, 2014 from 4:30 p.m. - 7:00 p.m. In lieu of flowers, donations may be made in Betty's memory to Fort Whyte Alive or Siloam Mission. THOMSON FUNERAL HOME 669 BROADWAY, WINNIPEG, MB R3C 0X4 204-783-7211 Condolences may be sent to www.thomsonfuneralchapel.com