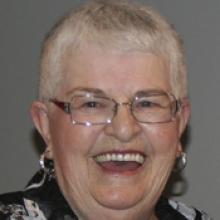 MERLE JONES 1946 - 2014 On May 26, 2014 Merle Anne Jones of Swan River, MB, formerly of Winnipeg, MB, passed away at the age of 68 years. Merle was born on March 24, 1946 in Winnipeg, MB where she grew up and eventually married Bert on May 10, 1969. In 1971 Tracy was born with Bill following soon after in 1972. In 1976 they moved to Swan River and together established Swan River Glass. Later they built their dream home where many good times were had with family, friends and neighbours. Merle spent her summers planting and caring for her flowers and watching the birds. After retirement Bert was finally able to convince her to try fishing and she loved it. During the winter months, Merle could be found in her favourite spot sitting at the kitchen table - either on her laptop or watching curling on T.V. and always with a cup of coffee in her hand. Merle's kitchen was always open for coffee and her cinnamon buns were enjoyed by many on Sunday mornings. Every Christmas her gift of butter tarts was anticipated by family and friends and her apple pies were enjoyed after many family meals. But most of all Merle loved and enjoyed every minute spent with her grandchildren Kendra, Jarret, Mykaela, Cailey, Colby and great-grandson Ethan. Merle is survived by her loving husband Bert; children Tracy (Shawn) Buhr and Bill (Tara) Jones; grandchildren Kendra (Byron), Jarret, Mykaela, Cailey and Colby; great-grandson Ethan; brothers John (Emma) and Ian (Linda), and sister Linda (Brian). She was predeceased by her parents, and her brother Blake. A memorial service was held from the Chapel of Swan Valley Funeral Services on Saturday, May, 31, 2014 with Reverend Murray Wenstob officiating. If friends so desire, donations in Merle's memory may be made to the Heart and Stroke Foundation of Manitoba or to the Community Foundation of Swan Valley. Arrangements were entrusted to Swan Valley Funeral Services Ltd. 363 Kelsey Trail, Swan River, MB R0L 1Z0 (204)734-5775 www.swanvalleyfuneralservices.com