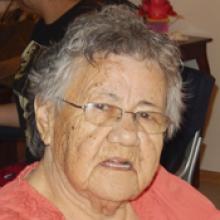 MARY CATHERINE HOULE After a courageous battle with cancer, it is with great sadness that the family of Mary Catherine Houle announces her passing on Saturday, June 21, 2014 at Ste. Rose Hospital at the age of 71 years. Mary was born in Ebb & Flow, MB on July 16, 1942. She married her husband Jim Houle on August 6, 1960 and together started a family. Mary worked in the home to raise her children in the early years. She then worked with the community elders as a homemaker, she got to know and enjoy the company of many elders that have passed on before her. She also volunteered with the Ebb & Flow Church Committee. In later years, Mary became a bus driver and took on a bus contract with the Ebb & Flow School; she continued to work as a bus driver until she retired in her early 60s. One of Mary's favourite pastimes was playing bingo and she also would get together with family and friends to play a game of cards. She had a circle of friends that she did puzzle exchanges with and would spend many hours putting puzzles together. Mary spent considerable amount of time with her sister Doris, and nieces Carol, Carmen, Paulette, Sheila and Amanda, they would enjoy each other's company, eat meals together and share a lot of laughs. Her nieces and their families gave Mary a nickname "mamere" to which they lovingly continued to address her with until her passing. Mary enjoyed seeing and spending time with her grandchildren and great-grandchildren. She made sure that each of them received gifts for all special occasions. Mary took pride in raising her grandson Craig who she held close to her heart. She was predeceased by her husband Jim on January 30, 2004, her son Bradley on January 22, 2010, her parents Charlie and Madeline Malcolm, mother-in-law Maggie Houle, father-in-law Vital Houle, her brother Geordie Malcolm and his wife Leona, brothers-in-law Gordon, Rufus and Gary Houle, and nephew Charles Starr. Mary leaves behind her loving daughters Wanda (Ivan), Shirley, Brenda (Wayne), along with her grandchildren, Pamela, Linda, Craig, Jennifer, Danielle, Tori, Jaylee, Dylan, as well as great-grandchildren, Kenton, Keira, Aiden, Kain, Zoey and Ryder. She is also survived by her sisters Doris, Lillian (Angus), brothers Joe (Lydia), Ernest (Charlotte), sister-in-law Delphine (Dave), brothers-in-law Willard (Dawn) and Cecil (Audrey), special friend Joe Davis, and godchild Carol Flett, along with numerous extended family members and friends. Viewing and prayers will be on Wednesday, June 25, from 6:00 p.m. to 9:00 p.m. with prayers being offered at 7:00 p.m. in the Sneath-Strilchuk Funeral Services, Ste. Rose Chapel with cremation to follow. Funeral service will held on Thursday, June 26 at 2:00 p.m. at St. Joseph's Roman Catholic Church, Ebb & Flow with interment following at the Ebb & Flow Cemetery. Urnbearer will be Carol Flett and all of Mary's family and friends are to consider themselves as honorary urnbearers. The family would like to thank Dr. Blais, the nursing staff and health care aides at the Ste. Rose General Hospital and a special thank you to Vivian Spence and Sharon Houle who took special care of our Mom. Sneath-Strilchuk Funeral Services, Ste. Rose Chapel in care of arrangements, 204-447-2444, www.sneathstrilchuk.com