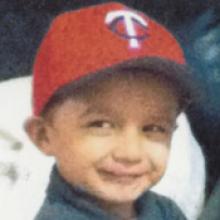 ROBERT WILSON SCHERBAN "The Lord giveth and the Lord hath taken away, ..." (Job 1:21). And so He summoned Robert Wilson Scherban back into His Kingdom. In the loving arms of his earthly father Robert Wilson passed from this life on Sunday, June 22, 2014. In the short three years God bestowed life, Robert evolved from an adorable baby to a bright eyed energetic boy. He was born October 2, 2010. Photos of his likeness published on his parents' Facebook pages always depicted him in designer clothing which exuded the class and potential he was to fulfill in his growing stages. He adored his Mom and was a typical father's son as he always wanted to be around his Dad. The radiant shade of his perfect skin, the lightness of his soft hair and that impeccable smile always captured everyone's warm admiration. He was a charming and handsome little darling. Yet, he was still an infant when his time elapsed. Although it doesn't seem fair, the family's unwavering faith must endure. They grasp to the understanding that the abruptness of his demise was near free of pain and suffering. Robert Wilson has entered his new realm, the afterlife in the arms of his heavenly father, arriving safe and welcomed. Robert Wilson is survived by his mother Elizabeth Higheagle, his father Robert Scherban, sister Aisha, and baby brother Royce. In deep sorrow also are his grandmother Darlene McLaren and grandfather John McLaren. His great-grandmother, Rose Higheagle, uncle Joseph Higheagle and aunts, Kelly McLaren, Victoria McLaren and Chelsea Liew. His papa Robert (Bob) Chartrand, nana Connie Chartrand, kukoom, Irene Chartrand, uncle Shane Chartrand, aunties Holly Scherban, Robin Appasamy and uncle Kevin Appasamy and many many cousins who are deeply saddened by this life altering event. A memorial and prayers will be held at the Aboriginal Funeral Chapel, 724 Selkirk Ave., Winnipeg, Thursday, June 26, 2014 from 7:00 p.m. to 11:00 p.m. In lieu of flowers attenders can bring food items to share. A traditional Wake to be held in the Dakota First Nation, Canupawakpa on Friday, June 27, 2014 starting at 4:00 p.m. Prayers and Burial, Saturday, June 28, 2014, approximately 2:00 p.m. The family wishes to thank all those who responded so caringly and kindly to this event on the fateful day. They thank the incredible outpour of support from the community at large and all who attend the site. They thank the medical officer, the funeral home and are very gracious for the tireless support of DOTC staff and the leadership of the DOTC First Nation. Aboriginal Funeral Chapel (204) 586-7700