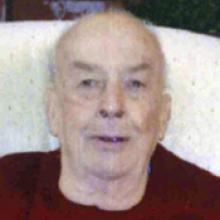 ANDREW KYNOCH With deep sadness we announce the sudden passing of Andrew Kynoch at the McCreary/Alonsa Personal Care Home on May 29, 2014. Andy was 82 years old. Andrew was born on November 24, 1931 in Glenora, Manitoba to Wilhamena and James Kynoch. Andy farmed the family farm for several years. He married Joan Kaye on December 31, 1958. In 1966, he moved to Winnipeg and started working for Versatile, he later moved to Ste Anne, Manitoba. Upon retirement from Versatile after 25 years, they moved to McCreary, Manitoba to be closer to Joan's twin sister Jean and family. Andy is survived by two sisters-in-law Doris Kynoch and Jean Ledoux, 13 nieces and nephews, numerous great-nieces and nephews and close friends. Andy was predeceased by his wife Joan in 1994, his brothers Albert, James, Bill and Gordon, and sisters Eva and Wilhamena. Funeral services were held on Tuesday, June 3, at 11:00 a.m. at the McCreary Legion Hall, interment at the McCreary Municipal Cemetery and luncheon followed at the McCreary Legion Hall. In lieu of flowers, donations may be sent to the Heart and Stroke Foundation. Sincere thanks to the staff of the McCreary/Alonsa Personal Care Home for their excellent care of Andy. Dobchuk Funeral Home McCreary, Manitoba Telephone (204) 835-2004 The Heritage of Neill, Dobchuk & Anderson, providing over a century of service.