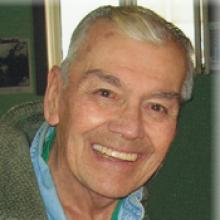 JACK VINCENT It is with sadness we announce the death of Jack Vincent, June 24, 2014. Jack was born to the late George and Belle Vincent and he lived his entire life in Mather. Farming was his love and he farmed with his dad and brother Garth, firstly and then on his own having steers to fatten and growing grain. In 1979 Jack lost part of his right arm in a grain auger but he continued to grain farm until 1999. In earlier years he was a member of the Cartwright Mather Glee Club and the United Church Choir. In the winter he enjoyed curling. Upon retirement his passion was reading, so afternoons were spent reading, listening to his favourite CD's and could be heard singing along, also listening to CBC news was a must. His little den was lined with maps and up to date atlases as he travelled vicariously. Jack will be remembered by his family as having a positive, joyful attitude and a strong sense of loyalty. Left to mourn are his beloved wife Margaret; son John (Kelly) Vincent; daughter Julie Vincent; sister Elaine Haight; grandsons Sam and Ty Vincent and Adriano Casarin; granddaughter Kaileigh (Brad) Dahlia and special mention of Kenah Coutu. He will be remembered by sisters-in-law Gwen (Norm) Bernard, Norma Vincent, Lois (Clarence) Vincent, Kathy Hart and Terri (Rick) Foster; brothers-in-law Larry (Joan) Hart and Terry (Patti) Hart as well many nieces, nephews and cousins. Jack was predeceased by brothers Clarence and Garth; brothers-in-law Delmer Haight and Ken Hart. A family burial will take place Tuesday, July 1, 2014 at the Mather Cemetery followed by an open reception at Mather Hall, Mather, MB at 1:00 p.m. Donations in Jack's memory may be made to the Rock Lake Hospital Foundation, Crystal City, MB R0K 0N0. Many thanks for the excellent care at Crystal City Hospital, what a great facility! God saw you getting tired And a cure was not to be, So He put His arms around you And whispered, "Come to Me". With tearful eyes we watched you And saw you pass away, And although we love you dearly We could not make you stay. A golden heart stopped beating Hard working hands at rest, God broke our hearts to prove to us He only takes the best. Messages of condolences may be made online at www.wheatlandfs.com Wheatland Funeral Service 204-825-2848 www.wheatlandfs.com