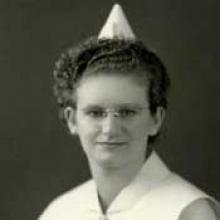 MAREA (KRIS) LARKE (nee KRISTJANSSON) 1919 - 2014 With heavy hearts we announce the sudden passing of our beloved wife, mother, grandmother and great-grandmother on June 21, 2014 at Boundary Trails Health Centre. Marea was born on September 18, 1919 on her father's farm in the 1-6 district. She married Herman Larke on February 18, 1943. Marea worked hard all her life, she studied nursing from 1939-1942 at the Freemasons' General Hospital in Morden, Manitoba. Herman was in the Army, once they were married he was posted to Camp Borden and they lived in Alliston, Ontario. In Alliston, Marea worked in a doctor's office as well as part time at the hospital. In 1960, Herman was posted to Germany. While in Germany, Marea worked at the British Military Hospital, she was given the status of nursing sister and had officer's privileges. When they moved back to Morden, Marea worked part time at the Morden General Hospital. Once she retired she became a member of the Hospital Auxiliary. She was still an active member at the time of her passing. Marea enjoyed tending to her garden in the spring and summer, freezing fruits and vegetables, making soup, pickles, jams and jellies. She also enjoyed baking; you never visited the house without a wide variety of cookies and cakes offered with a cup of tea or coffee. We as a family were truly blessed to have her in our lives for such a long time. Her zest for life and her eagerness to help care for family and friends will not be forgotten. She will be lovingly remembered by her husband of 71 years, Herman, her children, David (Paulette), Brenda (Steve), her granddaughter Melanie (Kent), and great- grandson Weston. She was predeceased by her parents Helgi and Louise Kristjansson and her sister, Olive Sutherland. Cremation has taken place and a private service will be held at a later date. A big thank you to all of the health care workers at Boundary Trails Health Centre for the fabulous care they provided. In lieu of flowers, donations may be made in Marea's memory to the Boundary Trails Health Centre Rehab Unit, Box 2000, Winkler, MB R6W 1H8. Wiebe Funeral Chapel, Morden In care of arrangements wiebefuneralhomes.com