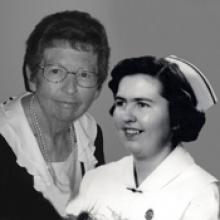 EUNICE WINNIFRED MARIE WEST (nee O'ROURKE) Eunice Winnifred Marie West (nee O'Rourke) passed away peacefully, surrounded by her family, at the Brandon Regional Health Centre on May 7, 2014. Eunice was born in Bigger, SK June 18, 1932. After her mother's death, Eunice was educated in Wainwright, AB with the Sisters of St. Joseph of Peterborough. Even in her early years, Eunice's kind and caring concern for others was evident in the loving and motherly way she looked out for her two younger sisters, Betty and Mary. Eunice always loved learning and excelled throughout school. Eunice had always dreamed of becoming a nurse and realized this dream in graduating from Nursing at the Misericordia Hospital in Winnipeg, MB in 1954. During this time, Eunice's leadership skills and the kindness and caring that were the very basis of her being shone in both her treatment of class mates and others in her personal life. When help was needed, Eunice was always there to listen and to help! Eunice practiced general Nursing in Winnipeg, the West Coast and Ontario before attending the University of Ottawa where she received her Diploma in Public Health. Eunice started with the PHU (Public Health Unit) in North Bay, ON and found her true calling. Eunice's matter-of-fact, common sense and strict sense of caring were her true assets. As a Public Health Nurse, Eunice made a difference to many families and students. Her diligence in searching out those in need made her, at times, the only "Trusted" contact for many. In 1976, Eunice was promoted to Supervisor of Nurses for the NWHU in Kenora, ON. Eunice's negotiating skills helped the Board of Public Health realize the importance of PH Nurses to the health of communities, families and students. Throughout her career, Eunice represented the NWHU on many Boards including the Children's Aid. She was well respected by the Provincial Ministry of Health and often contacted by them on health issues in the North. She belonged to the CWL and spent her "off" hours creating many beautiful gifts from cross stitch and petit point. Upon retiring, Eunice moved to Elliot Lake or "Canada's Northern Florida" as she often referred to it. Here, Eunice, true to her nature, continued to look out for others in her building ensuring all were receiving any care or assistance needed. Eunice was an active member of her building's social committee, taught cross stitch to anyone wanting to learn and expanded her love of crafting. Eunice is survived by her sister Betty Moseley-Williams (Gerald), son Stephen, daughter Anne, grandchildren Carleigh (Jon), Keri (Mandee), Kelsey, and Sarah. Eunice was predeceased by her parents Maurice Cavanaugh and Melinda Anne O'Rourke (nee Bradley), her six brothers and younger sister Mary. A graveside service will be held on Saturday, July 12, 2014 at 11:30 a.m. at St. Norbert Parish Cemetery, 80 St. Pierre Street, St. Norbert, Manitoba. A Celebration of Life will follow at the St. Norbert Arts Centre. In lieu of flowers, donations made in Eunice's memory to the Alzheimer Society of Canada would be appreciated. Messages of condolence may be placed at www.brockiedonovan.com. Arrangements were in care of Brockie Donovan Funeral & Cremation Services, Brandon, (204) 727-0694.