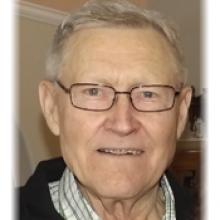 LLOYD MAYO Lloyd Mayo passed away on Wednesday, July 2, 2014 at Rock Lake Hospital in Crystal City, Manitoba. Lloyd was born on May 17, 1931 to the late Alfred and Helen (Orr) Mayo who lived and farmed in the Sinkerville Distict, southeast of Mather. With the death of his father, Lloyd, at the age of 14, assumed the responsibility of providing for the family. Experience was his teacher and through hard work and perseverance he became a thriving grain and cattle farmer. In 1955, Lloyd married Hazel Harris of Pilot Mound. They had two children: Kerry born in 1963 and Bartley in 1965. Lloyd and Hazel enjoyed many years on the farm until they retired to Crystal City in 1995. Lloyd was predeceased by his father in 1946; mother in 2009; brother, Darwin, in 1979; sister, Darleen Trembath, in 1984; brother-in-law, Gilbert Myall, in 1953; and nephew, Wade Trembath, in 1986. Left to mourn his passing are his wife, Hazel; daughter Kerry and her husband Doyle Lentz and daughters Brooke, Bobbie, and Billie; son, Bartley and wife Cynthia (Guilford) and children Zachary and Brynn; sister Audrey (Norval) Olson; and sister-in-law Jeanne Harris; as well as many nieces and nephews. The service will take place Monday, July 7, 2014 at 2:00 p.m. at Crystal City United Church with family burial to follow at Clearwater Cemetery. Donations in Lloyd's memory may be made to the Rock Lake Hospital Foundation, Box 130, Crystal City, MB R0K 0N0. The family wishes to express sincere gratitude for the respectful and compassionate care shown to Lloyd and their family by the staff at Rock Lake Hospital. Messages of condolence may be made online at www.wheatlandfs.com Wheatland Funeral Service 204-825-2848 www.wheatlandfs.com