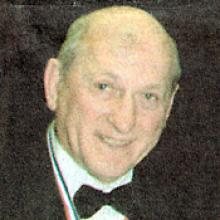 OREST (BUCK) MATIOWSKI It is with sad and heavy hearts that we announce the passing of Orest "Buck" Matiowski. Peacefully on Tuesday, July 1, 2014 Buck passed away at the age of 78 years. He was predeceased by parents Stephen and Annie, son Matthew John and brothers Mike and Joe. Buck is survived by his wife of 55 years, Ann, children Pat (Coral), Kelly( Iona), grand-daughter Emily, brother Ken, (Lilian) and his extended family of aunts, uncles, nieces, nephews, grand-nieces, grand-nephews and godchildren. Buck was born in Seech, Manitoba on March 31, 1936. Raised in the community of Oakburn, Manitoba. Buck was known throughout Manitoba and Ontario for his vision, passion and huge heart. He touched the lives of many people directly and indirectly. In Kenora, he initiated the Matiowski Farmers Market, The Green Team and Buck's Brigade. For many years, Buck facilitated the North American First Nations Hockey Tournament. He was a recipient of a Paul Harris Fellowship, the Lieutenant Governor's Community Volunteer Award, recognized by the Ontario Crime Control Commission and received the Queen Elizabeth II Diamond Jubilee Medal. Buck was a 4th Degree Knight (Knights of Columbus) and a former Rotarian. He was a past Chairperson of the Manitoba Intercultural Council, President of the Manitoba Amateur Hockey Association, Director of Canadian Amateur Hockey Association, Chairman of Manitoba Boxing and Wrestling Commission and Vice President of Canadian Professional Boxing Federation. It was a huge honour for Buck to be inducted to the Manitoba Sports Hall of Fame as a Builder in 2002. He was also extremely thrilled when the St. Nicholas Men's Club of Winnipeg subsequently named him Ukrainian Sportsman of the Year. A funeral service will be held at 10:30 a.m. Monday, July 7 at St. Nicholas Ukrainian Catholic Church in Kenora, ON (430 4th Street North). In addition, at 2:00 p.m., a Community Celebration of Life for Buck has been scheduled at the Whitecap Pavilion (Kenora Waterfront). Another opportunity to pay final respects to Buck has been organized for Green Acres Funeral Home in Winnipeg, MB ( Highway #1 East at Navin Road) on Thursday, July 10 at 1:00 p.m. In lieu of flowers, donations can be made in Buck's name to the Kenora and Lake of the Woods Regional Community Foundation... so that Buck's legacy continues Online condolences may be made at www.brownfuenralhomekenora.com BROWN FUNERAL HOME & CREMATION CENTRE ENTRUSTED WITH ARRANGEMENTS.