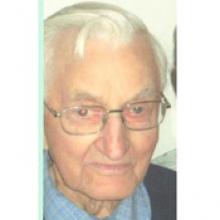 PAUL ARSENY (Emerson / Tolstoi) April 30, 1921 - July 10, 2014 With a degree of surprise, Paul passed on peacefully at the Altona Hospital an hour before being released, after seven weeks recovery and adjustment with chronic heart failure. A cancer survivor, and healing quickly from a broken pelvis last year, he was found too old for corrective heart surgery. With medication and treatment by Dr. Kliewer it was hoped his condition would give more time to continue life in as close to normalcy as possible. Born in Tolstoi to parents Jacob and Marie (Pidhirny) Arseny, the youngest of 11, seven brothers and three sisters, all deceased. He married Katie (Prokipchuck), on February 1, 1945. They spent the majority of their 69 years of marriage on the family farm in Tolstoi, then moved to current residence in Emerson. Paul and Katie had two children; daughter Audrey Burgess (Ralph) from Calgary, grandson Tyler. Son Wayne Arseny from Emerson with three grandchildren, Cara Mammosser (Didier), Braeden and Tatiana. With utmost sincere gratitude we thank Dr. Kliewer, nurses, and all Altona hospital care givers for their kind, caring and compassionate efforts for making his stay in the hospital as comfortable as possible. Prayers will be held at the Vita Funeral Home on Wednesday, July 16 at 7:00 p.m. Funeral service on Thursday, July 17 at 10:00 a.m. at the Tolstoi Ukrainian Orthodox Church. Interment will follow the service at the church cemetery, luncheon at Tolstoi hall to follow. Vichnaya Pam'Yat - Eternal memory. Vita Funeral Home in care of arrangements (204) 425-3114.