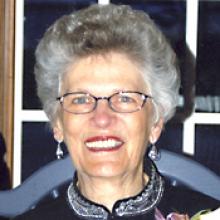 CLARA MARIA HOES (née VAN DER VLUGT) 1926-2014 Suddenly, on July 11, 2014 at the age of 87, Clara Maria Hoes (née van der Vlugt), our mother, grandmother, great-grandmother, sister, aunt, friend, passed away to join her husband John and her Heavenly Father. Clara was born on December 12, 1926, in Sassenheim, the Netherlands, one of eight children born to Willem and Marie van der Vlugt. Clara was predeceased by her loving husband of 51 years, Dr. John Hoes, in 2003, her parents, and five of her siblings. Left to mourn her passing, her seven children: Jackie and Danny (Chelin), William and Karen, Joe, Clara, Michael and Lynne, Paula and Grant and Frank and Lisa. Also grandchildren Amy, Luke, Anika, Kees, Derian, Mitchell, Abbey, Adam, Cory, Molly, Brett, Reid, Ashlen and Jackson. Also great-grandchildren Ridley, Clara, Elle, Ryann, Joel and Dublin. After having immigrated to Canada in 1952, John and Clara settled in Morden, Manitoba, in 1962 to raise their family. They remained in Morden for 49 years. Mom spent the past five years living in Winnipeg where she could be closer to her children and grandchildren. Mom will be missed. She was the glue that held the family together. As she lived her life, so she passed, with dignity, poise and grace. Prayers and viewing will be at 7:00 p.m. Tuesday, July 15, at Christ the King Church - 847 St. Mary's Rd. The funeral will be held at the same location on Wednesday, July 16 at 10:00 a.m. with Father Renato Pasinato officiating, with a light lunch to follow. A Christian burial will take place at 3:00 p.m. at Chapel Cemetery - 1050 Thornhill St. in Morden, MB. In lieu of flowers, please make a donation to the charity of your choice. Wiebe Funeral Chapel, Morden in care of arrangements, 204-822-4755 wiebefuneralhomes.com