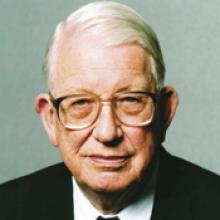 JAMES CHILTON HAWORTH MD, FRCPC FRCP (Lond) Died peacefully on July 16, 2014 after a short illness. He leaves to mourn his beloved wife Marian (Bowser) and his four children, Elizabeth (Julian Hatherell), Peter (Julie Legal), Margaret (Brian Brockman), and Anne (Troy Rich), and 14 grandchildren: Rachael (Daniel Minuk), Avril, Imogen, Emily, Fiona, Spencer, Dashiel, Gwenyth, Charles, Nicole, Ashley, Taylor, Marianne and Veronica. He was predeceased by his parents Sir Norman and Lady Violet Haworth, his brother David, and an infant son Jonathan Howard. Jim was born in Newcastle, England, May 29, 1923, and grew up in Berkswell. He attended Shrewsbury School. During the Second World War he studied Medicine at Birmingham University and then held postgraduate posts in Internal Medicine and Pediatrics at the General and Children's Hospitals in Birmingham. He did his military service in the Royal Navy 1947 -1949 as a ship's doctor. Following that, he pursued his specialty of pediatrics, training in London and Cincinnati. He took his MRCP in Hammersmith, and soon after he and Marian were married in 1951 he began practicing in Liverpool and then Sheffield. In 1957 Jim was invited to come to practice at the Winnipeg Clinic. Within a few years he focused on his research and took up positions at the Winnipeg Children's Hospital and the University of Manitoba. He conducted groundbreaking research on mothers and newborns, including the effects of maternal smoking and maternal diabetes on infants. He was an expert in children's malnutrition and metabolic disorders, with his research including sabbaticals in South Africa, Uganda and Australia. Jim was the Head of Pediatrics from 1979-1985, during the time of the Children's Hospital expansion, and Chair of the Canadian Pediatric Society Nutrition Committee in 1970. He was a lecturer and examiner for many medical students in Winnipeg, and he was author or co-author of numerous professional papers, review articles and book chapters. Following his retirement in 1992, Jim became the Executive Director of the Medical Services Research Foundation for 10 years. In his spare time he helped with archiving the history of the Children's Hospital in Winnipeg. Jim was an avid reader and gardener; he loved board games, classical music and opera. He collected Canadian and British stamps as well as British coins. Jim and Marian loved travelling and their many trips took them around the world as well as throughout North America. Jim drew up several family trees and he and Marian were in frequent contact with their many nieces and nephews, as well as extended family. Sunday teas, birthdays and holidays were all special occasions for the family to gather and to be quizzed by Jim on history, recite nonsense poems and play games. The Haworth family is extremely grateful to the staff at St. Boniface General Hospital for their care. Services will be held July 23, 2014 at 10:30 a.m., at St. Mary Magdalene Church, 3 St. Vital Road. In lieu of flowers, donations may be made to the Children's Hospital Research Foundation. THOMSON FUNERAL HOME 669 BROADWAY, WINNIPEG, MB R3C OX4 783-7211 Condolences may be sent to www.thomsonfuneralchapel.com