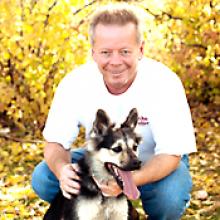 KENNETH EDWARD PACHKOWSKY It is with deepest sorrow we announce the sudden passing of Kenneth Edward Pachkowsky on July 20, 2014 at the age of 61. He is survived by his mother Helen, his children Ryan and Chelsey, brother Ron (Corrine), sisters Sheila, JoAnne (Mike), Amy (Calvin), Roberta (Randy), grandson Joshua and numerous cousins, nieces, nephews, and godparents Cliff and Phyllis Sawchyn. He is predeceased by his father Norman, brother Gerry, and brother-in-law Barry. Ken (Ted) was our well-travelled tumbleweed who lived an adventurous life. You never knew what stories he would have to share when you saw him next. From dinners with the Prime Minister to casual BBQs with blockbuster movie stars to flying his own plane, he never failed to amaze. His life as an independent sales representative and audio designer/technician introduced him to some of his many friends across the globe. His more recent work with Resonessence Labs had him jet-setting once again. His passion for music was unsurpassed and listening to his favourite musicians on his cherished West Lake Audio speakers was one of his favourite pastimes. Often a jovial comedian, he always had something clever and witty to say. He was a dreamer, always making new plans and ever so charming. He spent this last year happily travelling the province with his lovely companion Della Vincent-Clark. They loved snowmobiling and as of this summer motorcycling and boating together. They will be greatly missed and we have some small comfort knowing they were doing what they loved together when they left his world, her arms, full of love, wrapped tightly around him. Our family would like to give special thanks to the Lord our God for allowing us the wonderful gift of sharing his final years. We would also like to give condolences to Della's family. The unconditional love and joy she brought to Ken's life left him in awe. A Funeral Service will take place at 11:00 a.m. on Saturday, July 26 at Notre Dame du Laus Parish in Powerview. In lieu of flowers, donations can be made to Children's Make a Wish Foundation or any No Kill Animal Shelter. SOBERING FUNERAL CHAPEL & CREMATORIUM, Beausejour 204-268-3510 or MB Toll Free 1-877-776-2220 www.soberingfuneralchapel.com