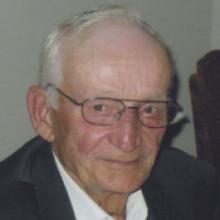 PETER TURKO It is with great sadness that our loving father, grandfather and great-grandfather was called to Eternal Rest on July 23, 2014 at the McCreary/Alonsa Care Home with his daughter Vikki at his side. Dad lived a long full-filled life who held on to traditional values set by his pioneer parents. These values consisted of honesty, hardwork, family respect, high ethical standards and sharing. Dad only had one solution to all problems--work harder. He was totally convinced that he lived in the best place in the world. He cherished his neighbours in the Birdina District and absolutely loved his community of Alonsa. His passion for farming was evident. Dad also had the honour and took great pride in serving his country alongside his two brothers Steve and Fred. We were so proud of our Father and his many accomplishments. He was a very driven determined man and because of that, he was able to live in his own home on his treasured farm until the last 3 months of his 93 years of life. Dad was predeceased by his wife Evelyn, four brothers, two sisters and one Grandson. Left to cherish his memory are his children, Perry (Valerie), Vikki, Brent (Beverly), Grandchildren Gaylynn (Dan), Candice (Justin), Travis (Tiffany), Delaney (Christine), Ashleigh, Dylan, Mikala and seven great-grandchildren. Funeral service will be held at the Alonsa Community Hall on Monday, July 28, 2014 at 10:30. Interment to follow at St. George's Ukrainian Catholic Cemtery with Father Emil Kardasinec officiating. In lieu of flowers, donations can be made to the St. George's Church Cemetery Fund, Alonsa, Manitoba. Vichnaya Pam'yat Dobchuk Funeral Home McCreary, Manitoba 204-835-2004 The Heritage of Neill, Dobchuk & Anderson providing over a century of service
Publish Date: Jul 26, 2014