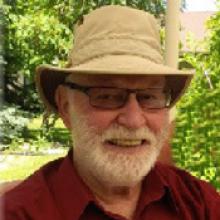 PALL VIGFUSSON It is with great sadness that we announce the passing of our beloved father, grandfather and great-grandfather. Pall died suddenly on July 31, 2014 at the Tri-Lake Health Centre in Killarney, MB. Pall was born in Arborg, MB on September 14, 1931, to the late Emily and Joe Vigfusson. He leaves to mourn his passing his three daughters; Paulette (Carl) Dingman of McNutt, SK, Pam (Paul) Lapierre of Killarney, MB, Pat (Rick) Bonnett of Rorton, MB, seven grandchildren and their families, his brother Einar (Rosalind) Vigfusson of Arborg, MB, many nieces and nephews, and his friend Kathy Wickens of Killarney, MB. Pall was predeceased by his wife Bernice, parents Joe and Emily Vigfusson, and his brothers Herman and Balvin. Pall and Bernice moved to Killarney to retire after spending many years in Thompson, MB. Pall enjoyed fishing, golfing, hunting, singing and most of all riding his motorcycle which he spent many hours touring around the countryside. Pall spent his last year in Bayside Personal Care Home. He really enjoyed his time there and all of the activities, especially singing which was his passion. A memorial service will be held on Wednesday, August 6, 2014 at the Killarney United Church in Killarney, MB at 2:00 p.m. Interment will take place at the Killarney Cemetery. In lieu of flowers, donations can be made to Bayside Personal Care Home, Box 5000, Killarney, MB R0K 1G0. Messages of condolence may be made online at www.wheatlandfs.com Wheatland Funeral Service 204-523-7791 - www.wheatlandfs.com