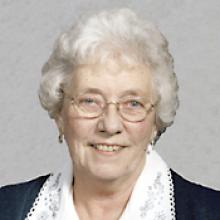 RUTH SCHMIDT (nee ENNS) With sorrow yet peace, we share the news of the passing of Ruth Schmidt. Born February 12, 1930, God called her home on August 3, 2014. She is survived by her children Rick (Sara Jane), John (Phyllis), Lori (Kerry) Enns, eight grandchildren and seven great-grandchildren. She is also survived by her sister Olive (Len) Siemens, and her Schmidt family in-laws; Lily, George and Rita, Lena, Vic and Vanita, Margaret, John and Frieda. She was predeceased by her husband Henry, great-granddaughter Naomi Ruth, and sisters Eva (Frank Warkentin) (Art Stevinson) and Hedy (David) Durksen. Ruth grew up near Oakville, married Henry, and spent the rest of her life devoting her energy to being a wife and mother, and later working part-time alongside Henry in the insurance business. Ruth also loved to share her gifts and time with her church community. After retirement, she and Henry enjoyed travelling together. She loved being surrounded by family, and all were prayed for daily by name. A celebration of Ruth's life will be held Friday, August 8, 2014 at 12:30 at Eastview Community Church, 3500 De Vries Ave., Winnipeg with viewing prior to the service. Interment will follow at Glen Eden Memorial Gardens. In lieu of flowers, donations may be made to Square One Media formerly FLN or charity of ones choice.