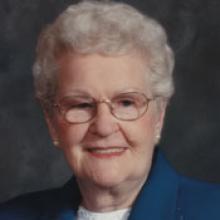 GRETA MAY PATTERSON Born May 18, 1917 - Died August 31, 2014 at the age of 97 years Greta was the daughter of William and Ina Stewart and grew up with schooling in Neepawa. She was predeceased by her husbands Arthur Crabbe in 1941 and James Patterson in 1981, her baby daughter Judy Lynn in 1947, her son James Crabbe, grandson Kirk Wark, sister Dorothy, and brother Roy Stewart. Greta is survived by daughters Marilyn (Glen) Carter, Lola (Alvin) Wark, Betty Patterson (Fred), Shirley (Brian) Evans, Gwen (Gerry) McMillan, and daughter-in-law Bunny Crabbe. Also, Greta had 16 grandchildren, 29 great-grandchildren and nine great-great-grandchildren. Mom's greatest joy was being a mother and a homemaker and all activities associated with raising six kids. She was a member of the Springhill Iroquois WI, UCW and the Victoria Seniors Club in Winnipeg. Since relocating to Neepawa she took part in activities with the Elks Manor and Drop-In Centre as well as volunteering her time knitting hats, scarves and mitts to donate. Mom was happiest at family reunions and wrapped in a blanket at wiener roasts. At Greta's request a graveside service will be held on Friday, September 5, 2014 at 11:30 a.m. at the Riverside Cemetery, Neepawa, MB with reception to follow at the Neepawa Legion club room. In lieu of flowers, donations may be made to a charity of choice. White's Funeral Home - Neepawa in care of arrangements. 204-476-2848