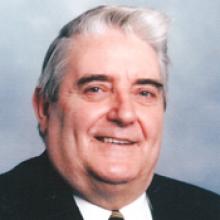 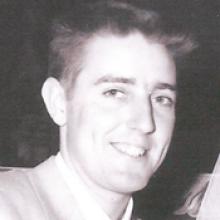 ARTHUR (ART) WATTIS August 4, 1932 - September 5, 2014 It is with heavy hearts we announce the passing of our father Arthur, at the age of 82 years. He passed away Friday, September 5, 2014 with family by his side. He will be lovingly remembered by his children, Tannis (Des), Mark (Marcia), Mike (Pat), Stena (Rod), Kirsten (Thorsten), and Kristine (Gary). He is also mourned by his companion Yvonne, his brothers and sisters Ellert (Eleanor), Eleene (Ben), Jona (Gerry), and Hilda, sister-in-law Barb, grandchildren, great-grandchildren, nieces, nephews, and a multitude of friends. He was predeceased by his wife and soul mate of 52 years, Betty, his eldest son Martin, his parents William and Jona, and brothers Harold and Bill. Dad lived in Fort Rouge most of his life. He attended Lord Roberts Elementary School, then Kelvin High School. After graduation Dad was hired with the CN Railway. He started as a telegrapher, then went on to become a dispatcher before finishing his 40 year career as President of the Rail Canada Traffic Controllers. After Dad's retirement he volunteered full time with the Royal Canadian Legion Winnipeg South Osborne Branch 252. He filled many chairs during his 25 year tenure with the Legion with many of those years as President. Dad was first and foremost a family man, a loyal man, a generous man, an understanding man. Those who knew him respected him and looked up to him. He was a friend to many, a foe to none. The family wishes to gratefully acknowledge the compassionate care and support that Dad received from the 3rd floor east wing staff at Riverview Health Centre, all staff on the 4th floor Unit 1 at Seven Oaks Hospital, and all the Palliative nurses and health care aides from W.R.H.A., with special thanks to Sean (the on call Palliative night nurse) and Janette Markham (Occupational Therapist) who went above and beyond the call of duty. A memorial service will be held on Tuesday, September 16, 2014 at 2:00 p.m. at the Winnipeg South Osborne Legion Branch 252, at 426 Osborne Street. A private family interment will follow at a later date. In lieu of flowers, donations can be made to the Winnipeg South Osborne Legion Branch 252.