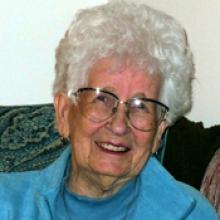 CAROLINE MARY BELTON Carrie has gone to sing with the angels. Caroline died peacefully in her sleep on September 9, 2014 at the age of 101 years. Mum was born December 7, 1912 in Cartwright, MB to Margaret and Charles Davis. She was one of 10 children of whom Verona Lawler of Hansboro, ND is the only survivor. She is also survived by her sister-in-law Jean Davis of McCreary, MB. She has left her two daughters, Ruth Sanders and Ina Kuchciak (Stan). Mum was fortunate enough to have seven grandchildren, eight great-grandchildren, and 10 great-great-grandchildren. A great number of family and friends will miss her smiles and stories. She was predeceased by her husband Charles Manly Belton, sons Alan and Henry Belton, daughter-in-law Margaret Belton, son-in-law Sam Sanders, and great-granddaughter Hayley Belton. Mum married her music teacher and moved to Winnipeg Beach where Dad was the vice-principal. Later they moved to Winnipeg and settled at 485 Stiles Street, where Mum lived for 67 years, before moving in with her daughter Ruth. Mum bowled with the teachers league at Polo Park for 50 years and in 1968 had a perfect game of 5 pin. Singing was a large part of her life, first in the church choir and later with the Sweet Adelines. She entertained with Fred Noble and the Ragtime Gals, and finally with the Golden Rule Glee Club in Fort Garry Mum kept her interest in people right to her last day and was free with hugs to all. Her final years were spent at Beacon Hill Lodge where she made new friends and had a different way of life. Many thanks to the wonderful people at Beacon Hill who treated us all like family. Cremation has taken place and the service will be held on September 20, 2014 at 2:00 p.m., St. Andrews Anglican Church, 2700 Portage Ave., Winnipeg, MB 204-832-0117. In lieu of flowers, we suggest a donation to your favourite charity.