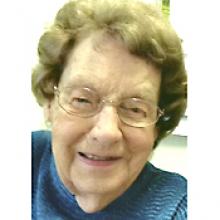 AGNES EULIA ALDERSON It is with great sadness that we announce the passing of Agnes Eulia Alderson (nee Reese). She passed away peacefully at Victoria General Hospital in Winnipeg, MB on September 12, 2014, at the age of 90 years with her four daughters by her side. She was predeceased by her husband Jim, sister Dortha, brothers, Edwin, Vernon, George, Elmer and Douglas and son-in-law Larry Stoski. Agnes was born in Grandview, Manitoba, January 25, 1924, to Otto and Ethel (Boyce) Reese. She leaves to mourn her passing and cherish many fond memories; her four daughters, Gloria Fillion (Grant), Lois Vegter (Grant), Audrey Stoski (Glen) and Rhonda Alderson (Gregg), her nine grandchildren, (who knew her as Grandma Kitty). Joel and Drew Fillion, Samantha Erne, Tanya Majkut, Tyler, Tyson and Steegan Stoski, Jarvis and Brock Christensen, and four great-grandchildren, as well as many nieces and nephews and great-nieces and nephews. Special thanks to Brock and Jarvis Christensen, Dale and Pat Randle, Robert and Janice Brickey and last but not least Renate Kofler for always being there when needed. Also many thanks to Dr. A. Pacin, nurses and all support staff on the 2nd floor of Victoria General Hospital for their compassionate care of Mom during her final days. Funeral Service for Agnes will be held on Tuesday, September 16, 2014 at 1:00 p.m. from St. Paul's United Church in Gilbert Plains, Manitoba. Rev. Steve Wilson will officiate with the interment to follow in the Eldon Cemetery. Flowers are gratefully declined, should friends so desire, donations may be made in memory of Agnes to a charity of one's choice. Sneath-Strilchuk Funeral Services 204-638-4110 www.sneathstrilchuk.com