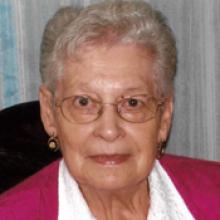 CLARA TAYLOR Clara Taylor is now resting in peace. On Tuesday, Sept. 16, Clara passed away at Seven Oaks General Hospital. She leaves behind her children, Joan (Russell), Johnny (Carol), Kim (Jim) and Bev. Her sister Doreen, and numerous grandchildren, great grandchildren and two great, great grandchildren also survive her. She was predeceased by her parents, her husband Frank in 1986, her brothers Ed, Frank, Ted and George, her son Bill and infant granddaughter Kimberly Taylor. Clara was born in Cypress River on May 8, 1923. She moved to Winnipeg as a teenager, met Frank and they were married in 1940. Clara worked various jobs throughout her life, and she and Frank often were caretakers at apartment blocks where they lived. Later in life, she volunteered at St. Joseph's Nursing Home and helped make perogies with the CWL ladies. Clara was a daughter, a wife, a mom and a nana and she will be missed by all who loved her. Funeral liturgy will be celebrated on Tuesday, September 23, 2014 at 10:00 a.m. at St. Peters R.C. Church at 748 Keewatin Street. Msgr. E. Samson presiding. Internment will follow at Brookside Cemetery after the reception at the church. Eternal Grace Funerals 204-505-4559