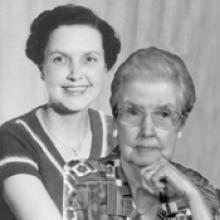 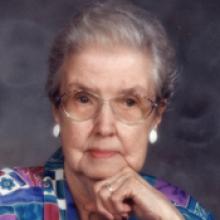 IRENE PENTON (nee LONGRIGG) With deep sorrow the Penton family announces the peaceful passing of our dear mother, grandmother, and great-grandmother, Irene (née Longrigg) on September 20, 2014 at age 96. Irene is survived by her seven children: Eleanor (Tony) Rock and their children Terry (Becky) and Maureen (Richard); Ken and children Marc (Kerri) and Lindsey Routhier (Darren); Nancy (Rod) Allen and children Caley Houtop (Justin) and Cassie Allen-Brown (Andrew); Bruce (Barb) and children Kirk (Sarah), Kate Overes (Scott) and Christine; Bob (Chris) and son Dustin (Susan); Brenda (Steve) and children Dan and Claire (Benji); and Laurie (Janet) and sons Connor and Erik; and 14 great-grandchildren. She was predeceased by her husband Terry, her siblings Ken and Kae Longrigg, and daughter-in-law Gayle. Irene was born in Winnipeg on April 30, 1918 and moved to Brandon with her family in 1933. She married Terry in 1941 and they raised their seven children in Brandon, 52 of those years on 28th Street. She was a long standing member of the Wheat City Al-Anon group, where she drew great satisfaction from the camaraderie and helping other people. She was also a proud founding member of the RCAF 502 Wing ladies' auxiliary. Irene enjoyed gardening and spent her summers puttering in her yard, nurturing her flowers and vegetables. She was very specific of the harvesting techniques and specifically how the potatoes were to be dug! Irene's adaptability and determination were demonstrated when she obtained her driver's licence at age 68 after Terry's passing. With her new wheels, she was able to maintain her independence. She also enjoyed travelling to visit her children and grandchildren across western Canada. The family wishes to thank the third floor staff team of Golden West Centennial Lodge in Winnipeg for its care and support of Irene over the past three years. The funeral service will be held at St. Matthew's Cathedral, 403-13th Street, Brandon, on Saturday, September 27, 2014 at 2:00 p.m., with viewing held prior to the service, beginning at 1:30 p.m. In lieu of flowers, donations may be made to the Terry and Irene Penton Memorial Scholarship, c/o Institutional Advancement, Brandon University, 270 - 18th Street, Brandon, MB R7A 6A9 or to a charity of your choice. Messages of condolence may be placed at www.brockiedonovan.com. Arrangements are in care of Brockie Donovan Funeral & Cremation Services, Brandon, (204) 727-0694.
Publish Date: Sep 27, 2014