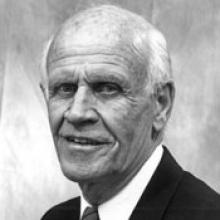 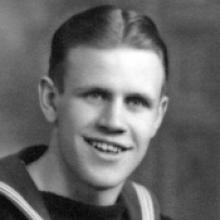 JACK LLEWELLYN MACDONALD, FCA Surrounded by his family, Jack passed away peacefully at Victoria General Hospital on Wednesday, September 17, 2014 at the age of 88 years. Left to mourn his passing are his four children and their families: Barbara (John Langstaff, Martyn and Rhys), Terry (Tracey Kernahan, Alex and Georgia), Bruce (Wendy MacDonald, Cassidy, Dylan and Kristin), and Janice Park (Ian Park, Emily and Owen). Jack was predeceased by the love of his life, Doreen "Dode", in May, 2013, and his two brothers, Cameron and Wayne. Jack was born on a farm near Russell, MB on November 9, 1925, the eldest of three boys. The early years were difficult for the family; Jack's mother became very ill and died when he was 14. The family moved to Neepawa for a year and then to Winnipeg settling in St. Vital. Jack completed Grade 11 at Glenlawn Collegiate and the day after convocation started his accounting profession training with Riddell, Stead, Graham and Hutchinson. Accounting was a good fit for Jack - he had an aptitude for numbers - however with national pressure mounting for military recruitment, Jack decided to join the navy and was moved to Cornwallis, NS. After the war he resumed his accounting career and earned his certificate in 1948 as a qualified Chartered Accountant. In the summer of 1946 Jack took a cruise up Lake Winnipeg to Norway House aboard the SS Keenora. It was on this trip that he met a gorgeous young woman named Doreen Edwards. They hit it off; but Jack being the pragmatic type, first completed his C.A. and secured a job before he popped the question. Jack and Doreen got married in April, 1951. Children started arriving shortly thereafter - Barbara, Terry, Bruce and then, Janice. Life was very busy. Jack's professional career path took him in numerous directions: from Riddell Stead he moved to Robinson, Little and Company and then to Gambles Canada Ltd. where he held the position of VP - Finance for 10 years. In the mid 1970s he joined MDC (Manitoba Development Corp.). MacDonald Shoe Store, a business started by Jack's Uncle Ainslie, was purchased by Jack and his brother, Wayne, in the 1970s, and then solely by Jack. Jack continued to own the store until the early 1990s when it was wound up. Jack believed it was important to give back to his profession - he was elected to the Institute Council and served as member or chair of several committees. He was also involved in the Institute education program for many years conducting weekly classes for fourth year C.A. students. In 1993, Jack was honoured by being elected a Fellow of the Chartered Accountants (FCA). He was extremely proud of this honour. Career was very important to Jack but so were sports. Jack was passionate about badminton - and his involvement covered more than a half century. He loved playing but after being sidelined by a serious knee injury he became involved with administration and development programs on the provincial scene. He served as president of the Manitoba Badminton Association for years and was president of the Canadian Badminton Association for three terms in three different decades. This provided Jack and Doreen with many travel opportunities both nationally and abroad. In addition, Jack managed to stay in the action by being a national level umpire for over 25 years. In 1992 Jack received the International Badminton Federation Meritorious Service Award. Jack served four terms on the Board of the Manitoba Sports Federation (now Sport Manitoba) and was inducted into the Manitoba Sports Hall of Fame in 1993 and the Canadian Badminton Hall of Fame in 2009. Jack was a longtime member of the St. Andrew's Society of Winnipeg and embraced Scottish culture. He served as President in 1987 - 1988 and was elected an honorary life member. He loved the bagpipes and for many years Jack and Doreen were involved in the Royal Scottish Country Dance Society. It was through this connection that Jack became the Mayor of the Great Britain Mug Pub Pavilion at Folklorama in 1983. Jack was thrilled that son Bruce played the pipes and daughter Janice competed in Highland dancing - the Scottish traditions carrying on to the next generation. Jack also enjoyed the outdoors and took his family on many camping trips across Canada, as well as spending time at Lake of the Woods every August. When he and Doreen were able to buy a cottage of their own it became a focal point for many happy gatherings of family and friends. He loved swimming and waterskiing and boating. Jack and Doreen managed numerous trips overseas: Hong Kong, Malaysia, Japan, Europe, Great Britain and South America were some of the highlights. Jack was immensely proud of his children and grandchildren. All his children graduated from university and both sons became Chartered Accountants. He knew the importance of sport and encouraged his children to participate in sports - and was especially proud to watch them compete in badminton and tennis. Jack was a longtime member of Harrow United Church and active in the church community. He taught the value of charity to his family and to care for those less fortunate. He also realized that friends and family were the most important assets a person could have and cared deeply for them all. A funeral service will be held at Harrow United Church, corner of Mulvey and Harrow, on Saturday, October 11, 2014 at 1:00 p.m. In lieu of flowers, if friends so desire, please consider a donation to the Friends of Badminton Manitoba through the Winnipeg Foundation; to Winnipeg Harvest, or a charity of one's choice. Chapel Lawn www.chapellawn.ca 204-885-9715