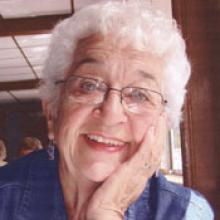 LAURETTE ROUILLARD November 27, 1931 - September 23, 2014 After a life well lived, Laurette passed away peacefully at Actionmarguerite (Foyer Valade). Left to cherish her memory are her daughter Gisèle Rouillard (Eric Black), her son Alain (Laurie) and their daughter Janelle (fiancé Sean Van Beselaere), son Jean-Pierre, (Br. Pierre, OSB, St. Peter's Abbey, Saskatchewan), and her sister-in-law Gisèle Page. Mom was a doting grandmother to Janelle, and adored her without reservation. She was so proud of the strong, beautiful young woman she has become. She also leaves her sisters Cécile Forest, California, Alice Gélinas, Minnesota, and Lucienne Boucher, Winnipeg, as well as her step-sister Yvonne Préfontaine, Gatineau, P.Q. She was predeceased by her beloved husband Pierre in 1999 after 50 years of marriage, and her brother Denis Gélinas, Québec in 2001. Mom was born and raised in Ste. Pierre-Jolys to Clodomir and Irène (Parenteau) Gélinas. Her mother having died when she was three and her father when she was sixteen, at age 17 she made her way to Winnipeg. She soon met Pierre, a dashing young Frenchman, and after a whirlwind courtship married May 7, 1949. Mom worked until her retirement in different capacities at St. Boniface Hospital: ward clerk, evening supervisor at the School of Nursing, and lastly as dispatcher in Central Transportation. Wherever she worked, she brought her sense of humour, and marked each workplace with her own unique stamp. Mom had a strong sense of joy, warmth and compassion. She had an extended family in her fellow actors and staff of the Cercle Molière. She began acting in 1974 and acted in 33 plays with the Cercle Molière, as well as television, radio, NFB, commercials and advertising. She was awarded Le prix Réseau in 2002 for her contribution to the French Arts. Her husband and family were highly supportive and so very proud of her commitment to the theatre. She had a rare talent in bringing life to the written word. As Wm. Shakespeare wrote: "All the world's a stage, and all the men and women merely players. They have their exits and entrances, and one man in time plays many parts." Joyous, warm and compassionate are all traits to remember her. Mom had a wonderful joie de vivre, and was never happier than when entertaining and cooking for friends and family. She would actually get annoyed if she did not have guests for Sunday supper, and who were sure to leave with leftovers. She hosted many ESL students As Home Stay sponsor who were in Winnipeg to learn English, and maintained contact even after they had moved on. To many young students, she is remembered as Nana. From an ebullient active woman, mom's life took a major shift when she was diagnosed with Multiple Myeloma in February 2013, and soon after with major cardiac issues. She took it in stride in her stoic manner, refusing to wallow in self-pity, and concentrated on enjoying life to the fullest extent she was capable of. She stated that she had had a long and good life, and anything after was just extra. She moved to Foyer Valade in August 2014, maintaining her sense of humour though her body was failing. The family wish to express their deep appreciation for the care and compassion shown to mom and her family by Foyer Valade staff and CancerCare. Mom died as she lived, with dignity and grace. The family also wishes for you to view this link: http:ici.radio-canada.ca/regions/manitoba/2014/09/25/001-cercle-moliere-laurette-rouillard-mort.shtml?isAutoPlay=1 A limb has fallen from the family tree. I keep hearing a voice that says "Grieve not for me." Say not in grief "she is no more," But live in thankfulness she was. Hebrew proverb. Flowers are gratefully declined. If people wish to make a donation to charity of their choice, or to Cancercare Manitoba, same would be appreciated. Funeral service will be held at Paroisse Saints-Martyrs-Canadiens, 289 Dussault Avenue, Winnipeg on Monday, September 29, 2014. Eulogies will be at 12:30 p.m. with the funeral service at 1:00 p.m., with luncheon to follow. A private family interment will take place at a later date. DESJARDINS 233-4949 1-888-233-4949 www.desjardinsfuneralchapel.ca