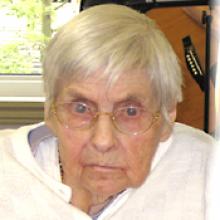 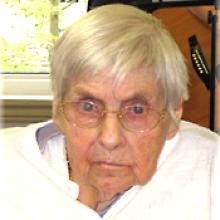 MARGARET MATILDA JANSSENS Margaret Matilda Janssens passed away at Moira Place Senior's Home in Tweed, ON September 21, 2014 after a long fruitful life at the age of 97. She was born in a homesteaders shack near Crane Valley, SK on August 22, 1917. Mother took great pleasure in telling stories of how their family prospered in the 1920s and survived the depression in Saskatchewan in the 1930s. The stories always portrayed much happiness through sometimes difficult situations. She married Louis Janssens on November 23, 1942. They rented farms by Goodlands and Medora until they finally purchased their own place Northwest of Boissevain in 1956. They raised four children Irma, Sheila, Lorne and Lloyd. Mother worked hard on the farm milking cows, shipping cream, tending a large garden and helping out with the general farming operation. We all look back on the days that we spent on the farm as a very happy fulfilling time in our lives. Mother worked at West View Lodge for a short time after her and Dad retired from farming and moved into Boissevain in 1976. In retirement they enjoyed many trips to the West coast and Ontario to visit with their daughters Irma and Sheila's families. After Dad passed away On October 31, 1996 Mother moved into the Centennial Apartments in Deloraine where she lived until moving to Tweed, ON in June of 2005 to be close to Sheila. She is predeceased by her husband Louis and a grandson Jimmie Cave. Survived by her children Irma (Jim) Cave, Sheila (George) Scott, Lorne (Robyn) Janssens and Lloyd (Ann) Janssens, grandchildren Terri (Gaetano) DiNicolo, Julianna Janssens, Jessica Janssens, Robert Janssens, Chris (Bev) Janssens and Jennifer Janssens, great-grandchildren Anthony DiNicolo, Mathew Dinicolo, Christina DiNicolo and Dean Janssens. Smith Funeral Home 204-747-2088 www.wheatlandfs.com
Publish Date: Oct 4, 2014