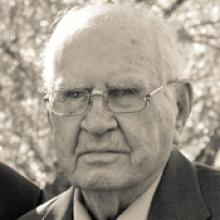 LORNE PETO Lorne Peto, beloved husband of the late Margaret Peto, passed away peacefully on October 8, 2014 at the age of 95, at Hillcrest Place in Brandon, MB. Lorne was born in Emerson, MB on September 27, 1919, and grew up there on the family farm with his parents Morton and Ethel Peto and his three sisters. He attended Manchester School and the Agriculture Faculty at the University of Manitoba. Lorne married Margaret Gibson, the love of his life, in 1940. Lorne served in the Second World War in Nova Scotia and in Newfoundland. He returned home to the family farm following the war and farmed until the 1980s. The Peto family was very involved with the introduction of the sugar beet industry in Manitoba, and Lorne also worked for Manitoba Sugar for a number of years. He belonged to the Emerson Legion, the Masonic Lodge, served on the Emerson School Board, was active in the Anglican Church, and on the Emerson Complex Committee. Lorne and Margaret enjoyed many winters as snowbirds in Weslaco, TX at the Pine to Palm Mobile Park and made many lifelong friends there. They also spent many happy hours traveling throughout Canada and the States with their motor home visiting friends and family. They loved to golf, which they both did well into their 80s. Lorne and Margaret moved to Brandon in 1995, to be closer to Allen and his family. They moved into Lion's Manor in 1998, and Lorne lived there until his health failed in 2013. He moved to Hillcrest Place in January 2014. Lorne was predeceased by his parents, his wife Margaret, his sisters and their spouses, Dorothy and Lloyd Morrow, Marion and Roy Ash, and Gladys and Dr. Doug Murray, his son-in-law, Howard Casper, his grandson, Lorne Casper, and his nephew, Doug Morrow. Family was important to both Lorne and Margaret, they were exceedingly proud of their children and grandchildren, and Lorne loved his great-grandchildren dearly. Lorne and Margaret were married for 66 years and are survived and lovingly remembered by their daughters, Sandra Casper of Fargo, ND, Elaine (Al) Hengstler of Calgary, AB, and their son Allen (Karen) Peto of Brandon, MB. They are survived by six grandchildren, David Casper, Leanne (Mark) Leier, Kevin Hengstler (Kelly Stothers,) Sarah Peto (Trevor,) Nathan (Tyne) Peto, and Alanna (Jon) Schouten, and their great-grandchildren, Ethan and Nate Leier, Clark Goran, Noah and Henry Peto, and Audrey Schouten. They are also survived by many nieces, nephews, and their children and grandchildren. The family would like to thank the staff at Hillcrest for the kind care they provided to Lorne while he lived there. A private graveside memorial will be held at the Emerson Cemetery on October 22, 2014. In lieu of flowers, donations may be given to the Alzheimer Society, 457-9th Street, Brandon, MB R7A 1K2. Messages of condolence may be placed at www.brockiedonovan.com Arrangements are in care of Brockie Donovan Funeral & Cremation Services Brandon, (204) 727-0694.