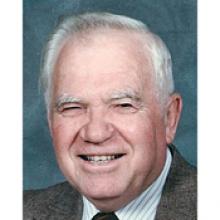 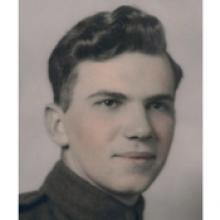 MICHAEL WILLIAM TATARYN Peacefully on October 26, 2014, Michael (Mike) Tataryn, passed away at Holy Family Home at the age of 91 years. Michael leaves to mourn his passing his children Oksana (Michel) Douchant, Taras (Terri) Tataryn, Paul (Heather) Tataryn, Mary (Cameron) Fehr, Marta (Alan), Andrew (Halyna) Tataryn, and Peter (Regan) Tataryn; sister Elsie; sisters-in-law Iris Smith and Lydia Tataryn; nineteen grandchildren; two great- grandchildren and many nieces and nephews. He was predeceased by his wife Sophia; parents Wasyl and Frances Tataryn; parents-in-law Daniel and Olga Capiak; brothers Maurice Tataryn and Walter Tataryn, brothers-in-law Walter Capiak, Jack Smith, and Gerald Aubin; sister in-law Frances Tataryn and daughter-in-law Sonia. Dad was born on November 21, 1922 in the Brooklyn area of Winnipeg. The family lived for a few years in Detroit, then in 1929 settled to a farm on Red River Drive south of St. Norbert. Upon graduation from St. Norbert High School in 1941, he taught in Meadow Portage and then returned to graduate from Winnipeg Normal School in 1943. He taught near home at Queen Elizabeth School in Howden. Dad was conscripted into the army as a gunner from 1944-1946. After the war in Europe, he returned and became the Principal in Steep Rock in 1946. He entered the Faculty of Science at the University of Manitoba in 1948, graduating in 1952. Dad continued his passion for education receiving higher teaching certificates and his second degree, a Bachelor of Education in 1957. During the University years, a summer job took him to Thunder Bay with a wartime friend, where they helped in the building of the Great Lakes Grain Terminals. It was there he met his future wife, Sophie', at a dance. Their love grew and they were married at Sts. Vladimir and Olga during the 1950 Flood. Many happy years followed as together they raised their growing family. They made many wonderful friends and memories where they lived - Belmont, Neepawa, Pine Falls, Prince George, Dauphin and Winnipeg. Dad continued in the teaching profession becoming Superintendent then returned to teach before retiring after 1985. Dad had strong faith in God, he joined the Knights of Columbus in 1955, he was a Charter member of Pine Falls Council, became a Past Grand Knight of two councils, including Holy Family Council. He was awarded Honorary Life Membership. He was a very active member on the many related church executive committees. He was famous for his slide shows and love of photography. His love of reading and his book collection was impressive. Family gatherings were always held at Mom and Dad's right up to their mid-80s. When we were kids, Dad and Mom took us all across the country camping. In their retirement years they enjoyed trips to Ukraine, Hawaii and Alaska. Dad loved gardening and if he wasn't there, he could be found in his workroom taking something apart to fix. He looked forward to Father's Day so he could go fishing with his sons. He loved to talk with company that visited, including many of his friends, former students and co-workers. He was known for his wit and humour. Dad continued to live in St. Norbert until January 2013 when he moved to Holy Family Home to join Mom. Many heartfelt thanks to the staff at Holy Family Care Home in the St. Mary's wing and the St. Michael's wing for their support in the last years of Michael's life. In lieu of flowers, donations may be made to Holy Family Ukrainian Catholic Church Building Fund. Prayer Service will be held on Sunday, November 2, 2014, 7:00 p.m. at Holy Family Ukrainian Catholic Church, 1001 Grant Avenue. Funeral Services with Divine Liturgy will be held at 10:30 a.m. on Monday, November 3, 2014 at Holy Family Ukrainian Catholic Church, with Father Yaroslav Buduykevych officiating at both services. A memorial luncheon will follow in the basement hall where friends and family are welcome to offer their memories of Michael. Interment will follow at The Assumption of the Blessed Virgin Mary Ukrainian Catholic Church on Red River Drive south of St. Norbert. VICHNAYA PAM'YAT! Bardal Funeral Home and Crematorium 204-774-7474 Condolences: www.bardal.ca
Publish Date: Nov 1, 2014