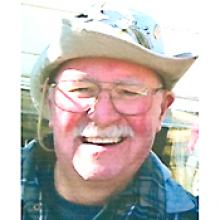 HAROLD BESWATHERICK Harold Beswatherick of Binscarth, Manitoba passed away on Monday, November 3, 2014 at the age of 73 years. He was born in Carberry on January 29, 1941 and spent his early years in Winnipeg, moving to Portage La Prairie in 1976 and then to Binscarth in 2002. Harold is survived by his wife Pat, daughter Paddy (George Graham) of Foxwarren, son Andrew (Jody Oxford) of Binscarth, three brothers, three sisters, and his very special grandchildren: Caleb and Donavin Beswatherick, and Cassandra Graham. Harold loved the great outdoors, everything from the smallest creepy spider to the majestic eagle, including camping, hunting, trapping and hiking. He loved to teach others, be it his siblings, children, grandchildren and many others. He spent many hours fishing anywhere, especially Silver Beach. Fishing was his passion and Harold spent 34 years working for Berkley Canada. One of his greatest assets was his smile and his whistle. His friends affectionately referred to him as "Happy Harry". His retirement years were spent developing a passion for photography and wildflowers; wild life and old homesteads were his favourite subjects. He also developed and printed his own pictures and they adorned the walls of many family and friends. Friends are invited to join the family for a time of fellowship and sharing of memories at the Binscarth Drop In Centre on Friday, November 7, 2014 from 2:00 p.m. to 4:00 p.m. If friends so desire, donations may be made to the Heart and Stroke Foundation of Manitoba or a charity of choice. Remembrances and condolences may be emailed to bbfs@mymts.net Braendle-Bruce Funeral Service of Russell is in care of arrangements. (204) 773-2747.