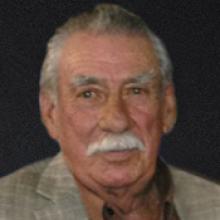 GLEN FRANKLIN THOMSON Glen Franklin Thomson passed away peacefully in Brandon after a short battle with cancer on October 31, 2014. Glen was predeceased by his wife Marilyn, and leaves behind his three children: Don (Jennifer), Cheryl (John), and Garth (Deanna), along with grandchildren Josh, Mary, Paige, Jossa, Jacob, and Tyler. Glen was born in Portage on August 22, 1935 to Melvin and Iverna Thomson of Austin. He was raised on the family farm and in the Austin area. Glen was valedictorian of the first graduating class of Austin High School in 1953 and cherished the friendships of those classmates for the rest of his life. It was also at Austin High School that he met the love of his life, Marilyn. After working on the family farm and fuel business following graduation, Glen headed to Northwestern Ontario to survey while his fiancé Marilyn worked in Winnipeg. They were engaged in Winnipeg and moved to Brandon following their wedding on June 14, 1958 in Austin. They purchased their Brandon home on Queens Avenue in 1960, which remained their home to present. Glen continued to work as a surveyor until 1966 when he took a travelling sales position at Frank Lawson & Sons. A great relationship builder, Glen established a strong network of dealers and customers who appreciated his can do attitude. He continued to count many of those customers as friends throughout his life Like Marilyn, Glen greatly enjoyed family time during the holidays. Whether picking the Christmas tree with his daughter or taking the family on road trips across the prairies, these were special times for the family. His children fondly remember those summer excursions where Glen was able to dedicate his time to following their pursuits and interests along with sharing much laughter. In 1970, Glen bought the family quarter section from his parents, and planted the first crop of what would become Glen-Mar farms. Over the course of the next four and half decades and with the support of family and valued employees, he slowly but surely expanded the farm to 1800 acres, taking his last crop off this fall. He was both proud of the innovations he brought to his farm such as zero-till seeding, growing hemp along with his common sense approach to maintaining traditional practice when it was the best choice. Glen was at home on the field and it was his refuge from his busy business life. He greatly enjoyed being a mentor to young area farmers who sought his advice. During uncertain economic times in the mid-1980s, Glen partnered with Bill Hamilton to create Glendale Industrials on Douglas Avenue in the city's East End. Originally focusing on horse and stock trailers, the company became a leader in vacuum pump trucks and miscellaneous metal fabrication. Glen's time at Glendale showcased his considerable skills as an innovator, leader, manager and salesman. Glen reflected on his time at Glendale as being some of the most rewarding work of his career. Retiring from his day job' in 1998, Glen continued to farm as well as redirecting his energy into his six grandchildren. Along with Marilyn, they travelled the province in winter and summer proudly following their exploits on the rink, in the gym, and on the fields. Glen's competitive spirit lives on in them. Glen's interment service was held at the Austin Cemetery on November 6. A celebration of his life took place at the Central United Church in Brandon on the same day. Celebrant Kim Lewarne presided over the service and eloquently spoke to many of the endearing qualities of Glen. His two sons, Don and Garth, gave a thoughtful, caring and descriptive picture of his life. His six grandchildren prepared a letter to their grandfather that was shared during the service. Family, friends, and colleagues, in both the Brandon and Austin communities, will lovingly miss Glen. He will always be remembered for his integrity, passion, and commitment. Donations in memory of Glen may be made to the Brandon Regional Health Centre Foundation, "Cancer Services" or "Palliative Care," 150 McTavish Avenue East, Brandon, Manitoba, R7A 2B3. Messages of condolence may be placed at www.brockiedonovan.com Arrangements were in care of Brockie Donovan Funeral & Cremation Services, Brandon, (204) 727-0694