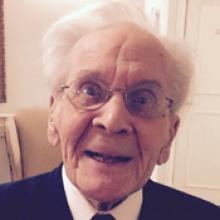 JARING TIMMERMAN Peacefully, at Grace Hospital on November 5, 2014, Jaring Timmerman's heart stopped beating, and his marvelous life on this earth ended. Born in Rotterdam, Holland on February 11, 1909, Jaring and his family immigrated to Manitoba in 1913, staying six months in Hilbre, before settling in Winnipeg. After his primary education, at the age of 16, he started work as an office boy at the Grain Exchange. Following his marriage to Bessie Swain in 1933, and the birth of their first son Bruce in 1936, Jaring moved his family first to Esme, then to Wadena, Saskatchewan where he worked as a grain elevator agent. Back in Winnipeg, in 1942, Donald and Donna completed the family. Jaring served with the Air Force as a Navigator on a Lancaster bomber for three years during the Second World War before starting his long career with the Grain Insurance and Guarantee Company, retiring from the position of President and General Manager, in 1974. A lifelong member of The Salvation Army, he served in many capacities including National Advisory Council member, and member and chair of the Board of Grace General Hospital. Jaring had a determination to maintain a healthy lifestyle throughout his life; always fit and active, he decided to pursue competitive swimming through the persuasion of his second wife Gladys, when he was 78 years old. During the following 27 years, he set many swimming records in the Masters Program, including six world records, five which still stand today. His most recent world records were set on January 24, 2014, in the 105 to 109 age category. As well as supporting his family, throughout the years, with no fanfare, Jaring generously supported many needy people and social programs, including The Salvation Army, and educational and community activities. Jaring became a poster boy for healthy living, an inspiration to seniors through his motivational speaking engagements, and an awe-inspiring icon to young school students. Jaring was recognized by the Queen, by the Governor General, by the Province of Manitoba, by the City of Winnipeg, by The Salvation Army, and by sports organizations for his many contributions and achievements over the years. His legacy will live on, as we remember a true gentleman who showed us all how to live well to the very end. Jaring's greatest commitment was to be a follower of the Lord Jesus Christ. Well done, good and faithful servant. Greatly loved and respected by all, he will be deeply missed by his family: Bruce (Sharon), Kari, Derek, Erica; Donald (Ruth), Brent, Janet; Donna Klassen (Walter), Nancy, Alan, Kevin; stepdaughter Barb Brose (Alan), Colby, Jeffery, Bryan; stepdaughter Judy Flaman, Philip, Shaun; his beloved great-grandchildren and extended family. He was predeceased by his parents Hendrik and Weitzke (Dolk) Timmerman, siblings Henry, Aleida, Dena, Adrian, and Jan (John), by his wife Bessie, after 46 years of marriage, by his wife Gladys, after 29 years of marriage, and by his beloved granddaughter Marcia Lynne. Funeral service will be held on Monday, November 10, 2014 at 11:00 a.m., at Grace Community Church, just west off Perimeter Highway south of Roblin Boulevard. The service will be followed by lunch and then interment at Chapel Lawn Memorial Gardens. In lieu of flowers, donations in Jaring's memory can be made to Manitoba Special Olympics-Swimming, 304-145 Pacific Ave., Winnipeg, MB R3B 2Z6. Chapel Lawn www.chapellawn.ca 204-885-9715