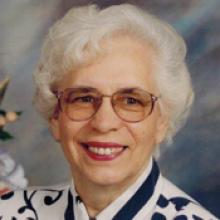 ANNE MARIE STADNYK June 24, 1935 - October 26, 2014 Anne passed away peacefully at Christine Morrison Hospice, Mission, BC with many friends by her side. Born, raised and educated in the Winnipeg area, she started her illustrious 36 year teaching career in 1954 at Dauphin Collegiate and continued in other schools in Winnipeg and other places in Manitoba, retiring in 1990. With her friend of many years, Grace Roberts, Anne moved to Abbotsford, BC. Predeceased by her grandparents, Anna and Wasyl Stadnyk, and her lifelong friends, Muriel Crellin and Grace Roberts. Her retirement from teaching was not an end to her diverse activities. She began her retirement as a car salesperson and later as an art dealer. She was also fully engulfed in giving to others which was most evident in her teaching of ESL and her mentoring in the Healing Journey for Women at her church. Her basement became a sewing mill for clothing and quilts for the disadvantaged. Her home was always filled with foreign students and others requiring a home to stay in. She has had lasting relationships with people in the United Kingdom, South Korea, Japan, Ukraine and Indonesia. She will be remembered for her warmth, charity and sense of humour. Many thanks go to Dr. Ian Cappon, the staff at the Abbotsford Regional Hospital Cancer Clinic, and the amazing and caring staff of Christine Morrison Hospice. A Celebration of Life will be held at Abbotsford Pentecostal Church, 3145 Gladwin Rd., at 1:00 p.m., on November 29, 2014. In lieu of flowers, donations may be made in her memory to the Abbotsford Hospice Society.