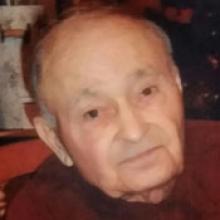 WILLIAM (BILL) NEVISTIUK It is with heavy hearts and much sadness that we announce the passing of William (Bill) Nevistiuk on Saturday, November 15, 2014 at the age of 89. Bill passed away with his family by his side at the Beausejour Health Centre. Left to forever cherish Bill's memory are his sisters Mary Venn, Sylvia Lundie, Audrey (Ken) Honstein, brother Andy (Pat) Nevistiuk and numerous nieces and nephews. He was predeceased by his parents Sedor and Elizabeth, brothers Steve, John, Jim, George and sisters Lena Gaber and Valerie Buleziuk. Bill was born January 1, 1925 on the homestead in Lennard, MB. He started farming at an early age with his Dad and then left to serve his country in the armed forces when he was 19. Upon his discharge, he went to Hamilton, ON to work for Firestone Tire. Following that winter there, he returned home to help on the farm during the summers and worked up north mining in the minus temperatures during the winters. After a few years, he returned home again to farming and cattle ranching with his brother John on a full time basis. Bill devoted most of his life as a caregiver to his Mother and brother George. Being a very politically-minded man, he was proud to serve his community as a Councillor as well as Reeve for the Boulton Municipality. Bill had a great interest for history and geography; he loved to learn and read. He had the opportunity to travel and experience many of the things that he researched over the years. Bill had a true passion for nature; he loved animals of all kinds and he could often be found planting new trees and caring for them on his properties. Most of Bill's properties have now been protected by the Nature Conservancy of Canada, which he was very proud of. As the patriarch of our family, Bill was a constant source of love, strength and knowledge. He touched the lives of many people with his generosity, kindness and caring ways and will be greatly missed. The family is at peace knowing that Bill is resting in the arms of his Lord. He is celebrating in heaven with his family and friends who predeceased him. The family would like to thank the wonderful and compassionate nurses, health care aids and staff at the Beausejour Health Centre. Special thanks to Dr. Askarafar for his professional care and making Bill's final days as peaceful as possible. Prayers will be held on Friday, November 21 at 7:30 p.m. and the funeral service will be held on Saturday, November 22 at 10:00 a.m., both at St. Elijah Romanian Orthodox Church. In lieu of flowers, donations can be made in Bill's memory to the St. Elijah Romanian Orthodox Church Cemetery Fund (St. Elijah Romanian Orthodox Church Cemetery Fund, c/o St. Elijah Pioneer Museum, Inglis, Manitoba R0J 0X0). Braendle-Bruce in care of arrangements, Russell, MB.